Wublin Island does not have the same island grid format as Natural Islands (i.e. Plant Island, Cold Island, Air Island, Water Island, and Earth Island) or Shugabush Island or Ethereal Island. It has a completely different format to these seven islands. In addition, the only Monsters that can be placed are the Wublins and the Wubbox, of which Wublins can be either 3x3 or 2x2, and Wubbox is 4x4.

Taking income generation into consideration, island design can be difficult to master when trying to make a great Wublin Island - a Wublin Island that has great income is not necessarily the best-looking Wublin Island, so you may choose to make trade-offs between income, and aesthetics.

As of version 2.1.0, you can have more than one of each Wublin on Wublin Island. Because Wublins are great sources of additional income - especially Shards and Diamonds - you could plan your Wublin Island to maximize income. Because all Wublins and the Wubbox generate the same amount of income, maximizing income is simply a question of fitting as many Wublins as possible on the island.

This naturally limits the selection to Zynth and Thwok as they only have a 2x2 Grid footprint, whereas the other Wublins have a 3x3 Grid footprint, and the Wubbox a 4x4 Grid footprint. Zynth is recommended, as it requires far fewer eggs to be zapped.

You can fit in some 3x3 Wublins when the space can't be rearranged for more 2x2's, without losing any income.

With the layout displayed here, a total of 109 Wublins - 97 on the ground level, and a further 12 on the platforms - can be placed.

Given a Wublin's earnings, you can expect, on average, to get the following income in a week (numbers will vary, especially based on how often you actually collect):

To produce Wublin Island's full song, and still generate a maximum income as well, a layout must be chosen where each of the required Wublins plus the Wubbox is present on the island, with the remaining space filled in with as many Wublins as possible.

One such possible layout is given here. The Wubbox (yellow checkers), all 3x3 Wublins (blue checkers), all 2x2 Wublins (purple checkers, and orange area) are present, with the remainder filled in by your choice of one of the 2x2 Wublins (Zynth/Thwok), giving a total of 88 Wublins (counting the Wubbox).

This provides both the full song and ~80% of the income of the maximum strategy above. The following is the average income in a week (numbers will vary, especially based on how often you actually collect): 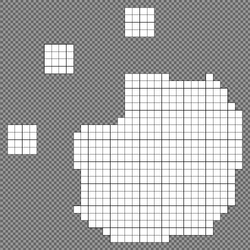 Wublin Island's Grid is different from that of the Natural Islands. It has 460 Grid squares, two of which can't be used for placing Wublins. Theoretically this would mean that you could place 114 2x2 Wublins - but in practice, the actual positioning of these squares means you are limited in the layouts you can choose.

You can use this image to plan your own Wublin Island layout.

These are a few other layouts based on maximum number of 3x3 Wublins, maximum number of Wubboxes, etc. These layouts serve no practical purpose as each Wublin has the same Earnings, and are included only for demonstration purposes.

Retrieved from "https://mysingingmonsters.fandom.com/wiki/Wublin_Island_Grid_Planning?oldid=303446"
Community content is available under CC-BY-SA unless otherwise noted.