While monsters are in the mine, they do not sing, and they cannot be fed, sold, moved, or teleported to another island. However, monsters may be used in the Breeding Structure during this time. The monster's level and species appear to have no effect on the items that are found in the Wondermine; only the elemental number of the monster affects item outcome.

The products that are produced by the Wondermine are listed below.

A monster that is sent into the Wondermine also brings back another Crafting Item. These items are randomly generated from all of the items that can be obtained from the primary production Structures, except for Weavers, that is, the Fruit Tree, Garden Patch, Bog, and Ice Machine. The one exception is the Apple Tart (

), which also has a chance to be found in the Wondermine. These items will give Experience (

) corresponding to how much the item gives when collected from its crafting structure. As the player reaches higher levels and their Production Structures are able to produce more kinds of items, the variety of these randomly generated items from the Wondermine increases.

If the player urgently needs one of a crafting item but doesn't particularly need more than one, a Quad or Quint Element Monster should be used, rather than monsters of fewer elements. For the same time period, a single trip for a Quad Element Monster has a better chance of getting one of a crafting item (for example, Amber) than two trips with a Triple Element Monster. Multiple trips with lower-element-number monsters may produce the same (or higher) statistical average of crafting items returned, but that's because the statistical average includes the possibility of getting more than one of an item.

The choice of what monsters to use, for best efficiency, is affected by a Dawn of Fire player's playing habits, particularly the times in which they are available to play the game.  Most importantly, the player must be active every so often in order to send a monster into the Wondermine. For periods of player inactivity, the monster selected to explore the Wondermine should be the highest elemental number available to the player so it can explore the mine while the player is away. For periods of constant activity and if many random items are desired, Single Element and Double Element Monsters should be sent into the Wondermine.  Obviously, one can use different kinds of monsters at different times of the day.

For the 2015 Christmas season, the Wondermine was decorated with multi-colored lights. In addition, the signpost, which marks a monster's position on the Continent while it explores in the Wondermine, contained snow on it. 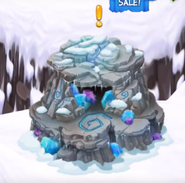 The Wondermine after a Monster has finished searching

The Wondermine after tapping it once a Monster has finished searching, showing the products found

Monsters exploring the Wondermine (not in-game)

Retrieved from "https://mysingingmonsters.fandom.com/wiki/Wondermine?oldid=327129"
Community content is available under CC-BY-SA unless otherwise noted.