My Singing Monsters Wiki
Register
Don't have an account?
Sign In
Advertisement
in: Islands, Natural Islands, Water Island,
and 3 more

Water Island is a Natural Island.

) is the fourth Natural Island available to the player. It manifests the Water Element (

after the player has purchased Air Island. 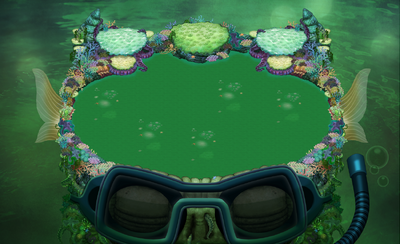 The monsters of Water Island are of the Earth, Water, Plant, and Air elements. Since Water Island lacks the Cold element, no monster with that element can exist on it.

The full Water Island song is available on iTunes for download. The Water Island's song, like that of Cold Island, is in the key of B major. The song plays at 140 beats per minute.

The ocean's deep, the currents strong!

Right here I found, where I belong!

It's all around. Can you feel the sound?

Main Article: Castle
To be placed on an island, each monster requires a specific number of beds. For Natural Monsters, this is equal to the number of elements that monster represents. Ethereal, Supernatural, and Seasonal Monsters each have varied bed requirements. Upgrade the Castle to unlock more beds.