Must be in a Tribe

Join as a natural monster
1/4

This Island is a collaborative effort between the player and up to 29 of their friends, who form a Tribe. Each friend can contribute one Monster (a "natural" single, double, triple, or quad-element type) to the Tribe's harmony. As the monsters of the Tribe are fed to higher levels, the Tribe as a whole reaches weekly Goals and is rewarded at the end of the week.

All 30 Natural Monsters are available to place by tribe members. Kayna is also unlockable on the island once reaching tribal level 100 each week. Each member of a tribe contributes one Monster, and multiple Monsters of the same species can be placed, meaning that the complete song can only be reached if each tribe member has a unique Monster.

There are no rocks and trees to clear on Tribal Island.

Join together with your friends to create a Tribe and unlock an ancient secret of the Monster World!

It's up to you to make sure your monster on Tribal Island stays well-fed so it can earn Starpower! At the end of each week, your Tribe's total Starpower will be collected and credited towards Tribal Rewards for all members to enjoy!

Get started by seeing which of your friends are already members of a Tribe.

A graphic from the in-game News provides a brief history of Tribal Island in Monstrous. Translated, it reads:

At one point in history, few could have foreseen the formation of Tribal Island. After all, the Colossals and their island hosts were fated to go their separate ways, never to rejoin... Were they not? The advent of Tribal Island represents the fulfillment of a prophesy from primitive times, in which greater bonds than ever before will be forged between caretakers of the monster realm. And harmony will once more be achieved.

Since the Islands that the Monsters sing on are considered the Colossals, Kayna may be the caretaker of Tribal Island.

To begin, select the Tribal Island from the island map. After that, press the "Tribal" button. The Tribal menu contains three tabs: "Tribes", "My Tribe" and "Top Tribes". On the "Tribes" tab, the player can see information about their friends' tribes, visit them, request to join one, or accept an invitation to join one. Alternatively, they can use the Tribal menu to create a new Tribal Island and invite others to it.

A maximum of thirty players can occupy a single Tribal Island. Since there are thirty different natural monsters, any duplicated monster will make it impossible to get the complete choir without replacing one of the duplicates.

The player can only be a part of one Tribe at a time, and they must leave a Tribe before they can join another. Be aware that whenever someone leaves and joins a different Tribal Island, their monster's level is reset to 1.

Each player chooses one (and only one) of the natural monsters for the island. They can only choose from the natural monsters that live on one of their own islands. (For instance, a player can't choose a Quarrister if they haven't bred one on Earth Island yet.) That monster is then fed to higher levels using food, coins, or shards. Monsters on Tribal Island can be fed above Level 15; there does not appear to be a maximum level, although monsters do not grow any larger after Level 15.

Each Tribal Island has its own Goals that can be achieved in return for diamonds, a common technique in Diamond Farming. When a Tribe member feeds their monster to a higher level, the overall level of the Island increases as well. Rewards are distributed among every member of the Island at the end of the week.

When the Island reaches Level 100, Kayna is released from the amber crystal in the center of the Island and joins the harmony of Tribal island.

Monsters can be fed with Shards, Coins, or Treats. The cost for each feeding is determined by the following formulas:

To level a Monster up, you will need to feed it 4 times, just as on any of the Natural islands.

Because the cost to feed a Monster increases quadratically for each Level, it becomes very expensive very quickly to feed a Monster to higher levels using Coins or Treats, and Shards are recommended instead. Shards can be regularly obtained from Monsters on Ethereal Island, Magical Sanctum, Wublin Island, and Celestial Island.

Direct formulas for Shards based on Level are:

Leveling Up the Island

Tribal Island is all about having multiple people feed their individual Monsters up, which increases the entire Island's level as well, to attain the Goal rewards or to get a high score on the leader boards.

Because feeding individual Monsters up to higher levels gets very expensive, very quickly, most Tribes will require their members to at least feed to a certain level in order to be fair.

As an example, presume that there is a Tribe with only two members, and they wanted to free Kayna. The Tribe as a whole would need to reach Level 100.
If one person would Feed their Monster to Level 99, while the other would remain at Level 1, the Tribe would be at Level 100. However that first person would have to spend 337,904 Shards to get there, while the other person spends nothing.
If both persons would Feed their Monster to Level 50 instead, the Tribe would also be at Level 100. However, now both persons spend 45,300 Shards each to get there, or 90,600 Shards total - much less than in the previous scenario.

That's why it's always best for each Tribe member to level up to the same minimum desired Level. The desired individual Monster Level can easily be calculated by taking the desired Tribal Goal level, and dividing it by the number of Members. The more members a Tribe has - up to 30 - the cheaper it will be for every person to get their Monster to the desired individual Monster level.
Using the above example, if there were 8 members instead of only 2, then half would only have to level up their Monster to Level 12, the other half to level 13 (12+12+12+12 = 48, 13+13+13+13 = 52, 48+52 = 100). This would cost each member only 764 / 956 Shards respectively, or 6,880 Shards total.

To get the maximum amount of Goal rewards - at Level 1500 - with the least amount of Feeding required, the Tribe should have 30 members, all of which would level up their Monster to Level 50. This gives the least cost (45,300 Shards each) for the most reward (20 Diamonds) at this time, a common technique in Diamond Farming.

See the Strategy section below for more details.

Starpower is a separate score for each individual player, but it is earned by participating in Tribal Islands. At the end of the week--at the same time as Rewards are distributed for reaching Tribal Goals--every Tribal Island member's Starpower score will increase. The amount of Starpower awarded is calculated based on individual contributions, and increases the more members there are in a Tribe, unlike the diamond rewards which are based solely on the Tribal Island level. Each player earns 5 starpower per individual level contributed, plus a base value common to all tribal members. The formula for the common base value is currently unknown, but for a 30 member tribe, it seems to be equal to the tribal island level plus approximately 250-300 additional starpower.

An individual player's Starpower accumulates continuously from week to week and does not reset when leaving a Tribal Island or joining another. However, staying in the same tribe for a high number of consecutive weeks will make the amount of Starpower you earn higher.

Starpower can be used to make purchases in the StarShop, where players can purchase Rare Monsters and exclusive decorations anytime.

Monsters do not earn Currency on Tribal Island. However, players do earn diamonds at the end of the week if the Tribe as a whole achieves certain Goals, allowing for Diamond Farming to occur.

If the player decides to join a tribe, it's up to the Tribe Chief to accept their request. They can improve their chances if they follow these guidelines:

To get higher amounts of diamonds and Starpower from your Tribal Island:

If you ignore the Starpower, the Tribal Island is a way to convert

. Assuming that all tribe members are evenly using shards to level their monsters, there is a point where it is no longer cost effective to keep leveling up since

1 in the market. Using this fact, the following table shows what individual levels need to be reached to meet tribal goals. Blank spaces in the table mean that it would cost more shards than it is worth to reach the next goal. For example, in a one-member tribe, it takes 35,020 shards to go from level 30 to level 50 to gain a 1 diamond reward, which is more than the 30,000 shards needed to buy a diamond in the market.

(Note that the higher levels are projected based on patterns found in the "leveling up" table.)

Despite not having a released song for its own song, the tempo and its key signature sound quite different. It plays at 120 beats per minute and at mostly D#/Eb Major.

Note that there is no advantage to being the top Tribe. There are no additional Tribal rewards after level 1500, and more Star Power per feeding amount is rewarded for lower levels. Becoming a top Tribe is thus all about bragging rights. 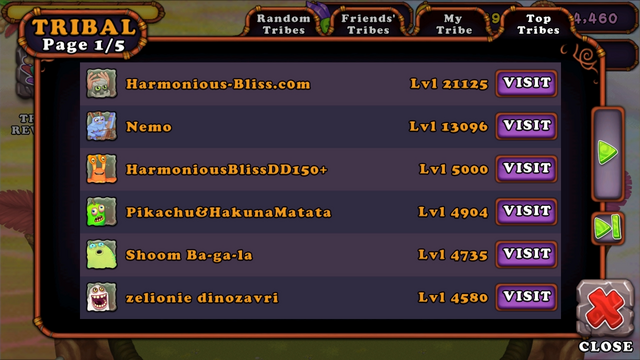 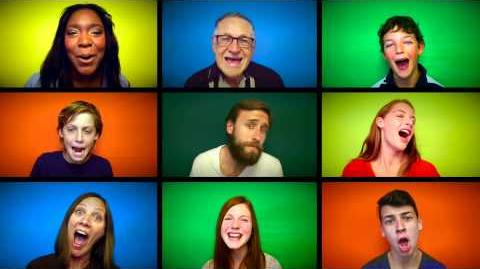