The main gameplay for the game Thumpies is to tap on each drum at the right timing to each Thumpies collision. Each of the Thumpies will bounce around each drum, either from outside the screen or from drum to drum. Unlike most rhythm games, the game detects accuracy on timing rather than a series of taps. More points are earned for accurate timing.

There are 18 levels in the game, each with their unique song. 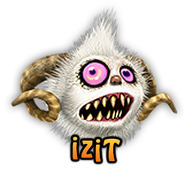 The trailer begins with a butterfly going to be on a blue Thumpies mushroom, but then NoObiE Comes out and chases the butterfly. but then eats the camera. and the gameplay of the game starts. for text like: They're CUTE! They're a little EVIL! &... They're addicted to BUTTERFLIES! and then a waterfall of Thumpies (like all of them) and then the logo appears on the screen. And there is the final text saying: ...an odd-ball rhythm game. Then the trailer is over.

Retrieved from "https://mysingingmonsters.fandom.com/wiki/Thumpies_(game)?oldid=306692"
Community content is available under CC-BY-SA unless otherwise noted.