My Singing Monsters Wiki
Register
Don't have an account?
Sign In
Advertisement
in: Islands, The Colossingum, Battle,
and 2 more
English

Naturals and Natural Island Seasonal Monsters only
Only Colossingum Decorations

The Colossingum is a unique Island where Monsters can train and compete in thrilling musical battles to win Monsterrific rewards. Teleport a selection of Level 5+ Monsters from the Natural Islands to the Colossingum, send them to the Conservatory for training, and sign them up for challenging Colossingum Quests to win big! More Monsters and a new Versus (PvP) mode coming soon, however, the Versus was released on December 4, 2020. It is quite like Composer Island. 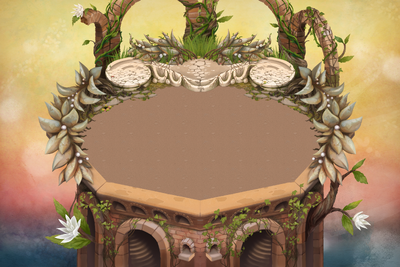 The Colossingum has its own levels, that requires its own Battle Experience (

In the Colossingum, players can battle in Quests, and Versus, a mode with player versus player (PvP) battles.

Unlike any other island, the monsters do not sing, and all monsters are in idle animation; technically becoming a lot like Composer Island, which is also true because Thumpies uses Composer Island Thumpies' idle animation. Instead, The Colossingum is run by the Jukebox, playing the soundtrack “The Monster World” by default, but can be changed to a different soundtrack once higher levels are reached.

Completing all stages of Three's a Crowd

Unlocking Level 8 in the Colossingum