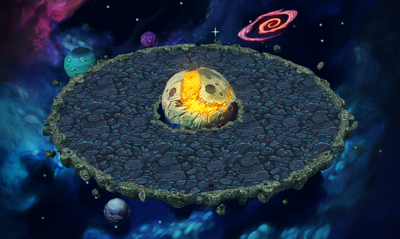 As its name suggests, Space Island is situated in space. Thus, the island is surrounded by many space-like objects such as stars, planets, and galaxies. Four main objects can be seen in Space Island's background: a purple planet, a sky blue planet, a turquoise planet, and a pink-orange galaxy. The three planets differ in size with the turquoise planet being the largest and the purple planet being the smallest. The island itself is a large, flat ring made out of rock with a meteor at its center. Small meteorites are also in constant orbit around Space Island, floating in a clockwise direction.

The monsters of Space Island, like the rest of the Outer Islands, are of the Natural Elements: Earth, Cold, Water, Plant, Air, and Fire.

The Space Island song is in the key of F Major with some aspects of F minor and even F Lydian on certain parts of the song, and it plays at approximately 130 beats per minute.

The song begins with Stogg on a flat F note, switching between two octaves. Noggin and Candelavra accompany Stogg. Half-way through this measure, Flowah joins in and sings.

The next part of the song then starts as the Furcorn, Repatillo, Tring, Potbelly, and Candelavra stops their parts. The Toe Jammer, Sooza, Rootitoot, Drumpler, Pummel, Clamble, and Sneyser join the song, and the Noggin continues its song. The Bowgart and Stogg both play a new track. The main tune goes F C B♭ A G B C B♭ A F D F G F G.

After two measures, the 2nd measure is repeated with the addition of the Flowah singing in the second half.

Next, the 3rd measure is repeated with the addition of PomPom in the 2nd half. The Noggin, Drumpler, and Clamble stop their songs.

The 5th measure is then repeated, with the addition of Clamble.

The next measure is a repeat of the 6th measure, with the Noggin returning.

This chart shows when each Monster is performing. Each part is 16 beats.