The Skyship is a structure that arrived in Version 1.5.0 of My Singing Monsters: Dawn of Fire. It is unlocked when Air Lands is unlocked at Level 19.

The Skyship serves as a challenge Structure where players fill out orders by giving the Crafting Items it requires in exchange for coins and XP; filling all 9 orders earns the grand prize of a sum of diamonds. As an extra challenge in the game, after a certain number of successful full Skyship deliveries, the Skyship may require more Crafting Items per order permanently, though this will also allow more coins and XP to be earned as well as offer larger diamond grand prizes.

The Skyship is a structure where the player has to fill in orders to earn rewards. Whole orders are completed by having the right number of Crafting Items for each order. Completing one order will earn coins and XP; the amount of coins being roughly between 50-90% of the highest possible Market price of whatever the Crafting Item(s) are valued at, and the amount of XP being equal to the amount of coin reward (actual coin value depends on Crafting Items). The grand prize for fulfilling all orders is a random number of diamonds, the amount depending on how complicated the all of the Skyship orders are as a whole. The grand prize of diamonds can range from 1

, although it more commonly is a grand prize of between 8

A 18-hour time limit is required to fill in all orders before earning the reward; otherwise the next set of orders will begin to arrive and the previous reward is lost. The player must wait 6 hours before the next Skyship arrives, if the time limit indeed expires.

Orders can be completed by dragging the Crafting Item(s) into the rectangular red crate. Doing so gives coins and XP and gives the chance to get the grand prize of diamonds. The player may wish for other players to fill certain order(s). A player who fulfilled one order for you will earn the coins and XP rewards to them, but not steal your grand-prize Skyship reward. Only up to 3 orders may be done by other players; the rest have to be done by you. If you fill an order marked to be filled by friends, you can select a different item to be filled by friends.

For some reason, there used to be a glitch where no one fills orders after requests and subsequently lowering the maximum numbers of orders that can be requested. This glitch had been fixed completely since Version 1.7.0., though occasionally in some devices this glitch may still happen.

Be aware about the 6-hour waiting time, since even unlocking the device to find the game still open will still trigger the Skyship coming.

The player may be eligible to be in the Top 100 Monthly or All Time leaderboards that are part of two categories: Top Shipper and Most Helpful. Being placed on any of these leaderboards does not reward anything but does help give ultimate fame of your own skill in Skyship dealing.

Note that to be on the leaderboard for anything you must earn at least one point in either Top Shipper or Most Helpful, which can be achieved by filling at least one whole Skyship order or helping a player with a requested order, respectively.

To be a good Skyship dealer, you must be able to keep up with managing every second of time, plan how to deal with the Crafting Item production/buying that the selection of Skyship orders has given, and dealing with what Structures to primarily work on to keep up the pace of the 18 hours of order filling. Do consider knowing which Crafting Items to store for later or start producing from scratch, as some Crafting Items are rare to get from the Market or difficult to produce by any Structure. Also consider whether it is a good idea to be spending a large sum of coins in exchange for the grand prize of diamonds, as not always coins can be easily produced, unless through frequent selling of easily sellable items.

As time is precious especially when being a frequent Skyship dealer, do always consider the amount of time put into the production of these Crafting Items, whether it be through rare Wondermine items or their products or from Crafting Items that simply take too long to produce (take Vitamin Pills for example; they take a whopping 8 hours to produce, and to make 3 of each is a mountain of a challenge if trying to go for the diamond grand prize).

You can have a look at what Crafting Items may start permanently increasing in requirements and when they do so in the Ranking of Skyship Requirements article.

It may help if you take late nights for this schooltime time management. This will assume bedtime of 10pm, preparation of school at 8am, and arrival at home at 4pm.

The Skyship Challenge was a major competition where players could participate in prizes in two ways: from following set daily tasks to get diamonds, the other being filling out a Monster Passport with stamps that were released daily. It had run from 6th May 2016 to 27th May 2016.

"Skyship" comes from a compound word for "sky" and "ship". As its name suggests, the Skyship is a shipping ship that flies in the sky. 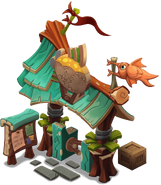 The airport from which the Skyship waits next to

A player who completed another player's request

Skyship offer of 43 diamonds for the grand prize

Skyship offer with tiny 2 diamonds for the grand prize

The Skyship at Christmas

Visiting a Skyship that has no Crafting Items highlighted

Sending Coconut Cheese to another player

Retrieved from "https://mysingingmonsters.fandom.com/wiki/Skyship?oldid=302518"
Community content is available under CC-BY-SA unless otherwise noted.