My Singing Monsters Wiki
Register
Don't have an account?
Sign In
Advertisement
in: Shugabush Island, Islands, Teleporting and Egg Islands

Shugabush Island contains the Shugafam, a type of Legendary Monster, as well as some Natural Monsters. Shugabush Island is available at level 6 for free, after purchasing Air Island. It was first released on December 10, 2013.

Like Ethereal Island, Monsters on this island can only be Teleported here from other islands, once they are fed to level 15. Teleporting will reset their levels back to level 1, and turn the monsters into eggs again. Teleportation is impossible to reverse, so the Monsters will stay permanently on Shugabush Island.

The Shugabush, which is bred on Plant Island, is the basis for breeding the rest of the Shugafam and it can be teleported to Shugabush Island once it is fed to level 15. All other Legendary Monsters are bred by combining the Shugabush with a Natural Monster on Shugabush Island. 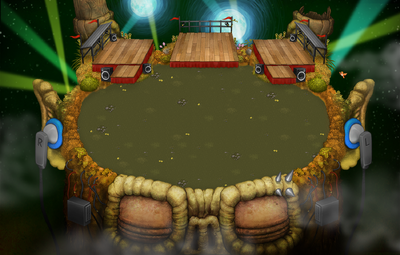 Eight of the Monsters of Shugabush Island have only the Legendary element; all but the Shugabush itself can be found only on this island. Seven other monsters have Natural Elements, and can live on the Natural Islands.

On Shugabush Island, all monsters can only be bred using a Shugabush + Natural Monster combination.

The music of Shugabush Island is a remix of Love or Money, from the award-winning Kristian Bush. Like the original song, the island's key is G major. The song plays at 89 beats per minute.

Main Article: Castle
To be placed on an island, each Monster requires a specific number of beds. For Natural Monsters, this is equal to the number of elements that Monster represents. Legendary Monsters each occupy three beds except for the Shugabush, which occupies two beds. Upgrade the Castle to unlock more beds.

It should be noted that Rate is half for 100% happy, and Time is doubled for 0% happy.