My Singing Monsters Wiki
Register
Don't have an account?
Sign In
Advertisement
in: Monsters, Plant, Earth,
and 13 more

The Shrubb has a green bush for a body plus a head, twiggy arms, legs, feet and hands and vine-like growth resembling a beard on its chin. It also has a small shrub on its back.

When this monster is idle, it stays in tempo with a simple pattern of arm and leg movement.

As it plays rhythms with its mouth, the Shrubb hops and buzzes its lips and the arm movement becomes more complex, making movements that somewhat resemble plucking the strings and working the frets of an invisible double-bass.

Shrubb's egg is dark green, with green warts and yellow flowers on it.

The Shrubb's contribution to an Island's song is a percussive rhythm, produced by beatboxing and buzzing its lips together.

The Shrubb can be produced by breeding monsters with the elements of Plant and Earth.

While trying to breed other monsters (particularly monsters with a very low chance of breeding), the following Wublins can be used to "dispose of" Shrubb eggs immediately instead of putting them into a Nursery and having that Nursery not be available.

While trying to breed other Monsters (particularly Monsters with a very low chance of breeding), the following Celestials can be used to "dispose of" Shrubb eggs immediately instead of putting them into a Nursery and having that Nursery not be available.

To see how efficient Shrubb is at generating resources compared to other monsters check:

Shrubb is a pun on "Shrub", referencing the one on the monsters' back. It has two B's as in beatboxer. "Shrubb" was also the name of a "Thing" from "Fling A Thing!".

To see all possible names for Shrubb, see Monster Names.

Shrubb's possible nicknames mostly come from the names of singers. 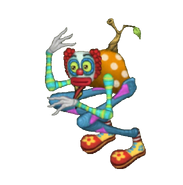 In October 2014, the Shrubb disguised itself as a clown with a red vine on its beard, orange body with white spots, blue legs with purple patches and clown shoes on it's feet. The Shrubb repeated this outfit from the 2016-2019 seasons. 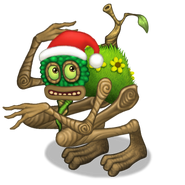 For the 2015 Yay season, the Shrubb was feeling a bit jolly and put on a Santa hat. This was repeated for all subsequent seasons.