My Singing Monsters Wiki
Register
Don't have an account?
Sign In
Advertisement
in: Islands, Teleporting and Egg Islands, Seasonal Monsters,
and 7 more

Seasonal Shanty is an Island with only Seasonal Monsters.

Seasonal Shanty is a teleporting Island that holds all Seasonal Monsters together in a single Island. When a Seasonal Monster reaches Level 15, you can teleport them to this Island. They will reset their Level, and get sent to the Nursery, and will also stay there permanently, unless sold.

On this Island, you can breed Monsters using Seasonal Monsters, something that isn't possible on other Islands. This can be used to breed the other Seasonals, and obtain Jam Boree without buying it. 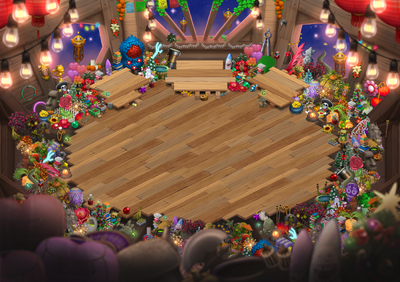 This is a list of all the Monsters indigenous to Seasonal Shanty. It currently has the elements of Spooktacle (

The song of Seasonal Shanty plays at 140 BPM in the key of C Major. It plays in the 4/4 time signature.

In order to get all monsters, it'll take a year and a half because there is also Out-of-Season events. If you already have a seasonal on that island, you can transport it to this island to get the monster to this island.

Outside of the Seasonal Shanty
Community content is available under CC-BY-SA unless otherwise noted.
Advertisement