My Singing Monsters Wiki
Register
Don't have an account?
Sign In
Advertisement
in: Monsters, Air, Earth,
and 15 more

The Scups is a peculiar creature, to say the least. Its body, which has a vague resemblance to a heart, is colored ocean blue. It has two yellow trumpet-like horns on its head. Its two purple and blue striped legs are somewhat long, and end with plunger-like feet. The face of the Scups looks like Bowgart if you compare them.

When this monster is idle, it stays in tempo by slowly marching in place, avoiding making any suction noises.

The Scups's song sounds like suction cups getting pulled off of hardwood and getting stuck back on, or plungers (or something rubber just as sticky).

The Scups can be bred using monsters that combine to provide all the elements of Air, Earth and Water. Possible combinations:

Because Tweedle and Fwog take much less time to hatch than both Quibble and Cybop, the first combination will provide more breeding opportunities in the same time period (on average).

(Best choice, 100% chance of a Scups if Rare Scups is unavailable)

(Good choice, 1% chance of a Reebro/Jeeode)

While trying to breed other monsters (particularly monsters with a very low chance of breeding), the following Wublins can be used to "dispose of" Scups eggs immediately instead of putting them into a Nursery and having that Nursery not be available.

While trying to breed other Monsters (particularly Monsters with a very low chance of breeding), the following Celestials can be used to "dispose of" Scups eggs immediately instead of putting them into a Nursery and having that Nursery not be available.

To see how efficient Scups is at generating resources compared to other monsters check:

The name "Scups" may come from the portmanteau of suction cups that the monster has. In addition to this, the Scups "scoops" its feet off the ground to create the suction cup sound.

To see all possible names for Scups, see Monster Names.

On December 15th, 2014, the Scups became green with blue stripes on its legs and red suction cups. It also wore a pair of antlers and a glowing red nose like Rudolph. In the iOS version, the Scups dressed up much later. This outfit was repeated for the 2015 and 2018 seasons. 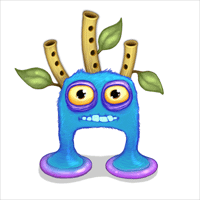