My Singing Monsters Wiki
Register
Don't have an account?
Sign In
Advertisement
in: Monsters, Air, Plant,
and 14 more

The Reedling is as odd looking as it comes.

Its body is in a hunched position similar to a T. rex, or, in the monster world, a T-Rox complete with hanging arms. It has a green furred back similar to a hedgehog or a porcupine, floppy ears like a dog and three toes on each foot. On its back are six flute-like appendages that look like the Wild Bagpipe Decoration. The "reed" of each pipe is near the Reedling's body, but the free end has what looks like a mouthpiece.

When this monster is idle, is stays in tempo by swaying back and forth and occasionally hopping, similar to the Fwog or T-Rox.

The Reedling Monster's contribution to the island's song is a tune produced by playing the recorder-shaped spines on its back. Strangely enough, the timbre of the instrument is more similar to a pipe organ's than any other wind instrument (the pipe organ does include reeds in some of its pipes, making it an appropriate choice for the Reedling). However, in Tribal Island and Fire Haven, it sounds more like a flute.

The Reedling can be bred using monsters that combine to provide all the elements of Air, Plant and Earth. Possible combinations:

Because Noggin takes much less time to hatch than both Potbelly and Tweedle, and all of the two-element monsters require the same amount of time, the first combination will provide more breeding opportunities in the same time period (on average).

(Best choice, 100% chance of a Reedling if Rare Reedling is unavailable)

(Good choice, 1% chance of a Jeeode/Humbug)

While trying to breed other monsters (particularly monsters with a very low chance of breeding), the following Wublins can be used to "dispose of" Reedling eggs immediately instead of putting them into a Nursery and having that Nursery not be available.

While trying to breed other Monsters (particularly Monsters with a very low chance of breeding), the following Celestials can be used to "dispose of" Reedling eggs immediately instead of putting them into a Nursery and having that Nursery not be available.

To see how efficient Reedling is at generating resources compared to other monsters check:

The name "Reedling" may reference the reed, a common name of many plants native to waterlogged areas. Some reeds are said to produce sound after being struck with wind. Also, the reed is part of the mouthpiece of a woodwind instrument; the breath across the reed causes it to vibrate, and the vibrations are amplified and modulated by the body of the instrument.

To see all possible names for Reedling, see Monster Names. 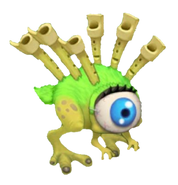