Rare Tweedle is a single-element Rare Monster. It was added on July 27th, 2015 during the 1.3.4 Rare Single Elemental update. As a Rare Monster, it is only available at select times. When available, it is best obtained by breeding two triple-element Monsters that have the Air element, or by purchasing from the StarShop. By default, its breeding time is 6 hours long. Although a Rare Monster, Rare Tweedle still does not have high coin production.

The Rare Tweedle can be bred with any combination of triple-element Monsters that include the Air element:

Note: It is not advisable to use Thumpies and Congle on Cold Island during the Festival of Yay, as this is a breeding combination for Yool, unless aiming to also have a chance to breed a Yool. The same applies with Spunge and Scups during Easter (Eggs-Travaganza) as Spunge + Scups is the combo for Blabbit.

Rare Tweedle, like all Rare Natural and Fire Monsters are only available for breeding and buying some of the time during special events. Examples of such events:

Every monster has different things that they like. For every unique object that they like that's placed near the monster, the monster's happiness will increase by 25%. Placing more than one of the same liked item near a monster will still only increase its happiness by 25%. If there's a Unity Tree on the island, items don't need to be near the monsters. Below are the things liked by Rare Tweedle:

) of Rare Tweedle varies by Island:

Unlike most Monsters, Rare Tweedle does not like any decorations, only Monsters. 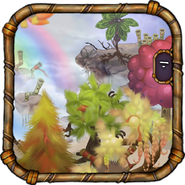