The Rare Spunge is the same size and shape as the Common Spunge, but is a different shade of green, and, as mentioned above, it has three eyes instead of two, six arms instead of two, and two leaf sprigs on its head instead of one. And, presumably because of its dry-eye condition, its eyes are reddened, compared to the Common Spunge's baby blue eyes. In addition, one of its leaves looks like it has been partially bitten/eaten off.

The Rare Spunge can be bred exactly like the Common Spunge, using monsters that combine to provide the elements of Air, Plant, and Water.  Possible combination(s):

Another good strategy is to breed the Common monster with a single-element monster, as single-elements take the least time to hatch.

Rare Spunge, like all Rare Naturals and Fire Monsters are only available for breeding and buying some of the time during special events. Examples of such events:

To see how efficient Rare Spunge is at generating resources compared to other monsters check: 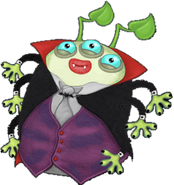 In October 2015, the Rare Spunge wore the same vampire costume as its common counterpart. The bite mark in its left leaf is missing. This also returned in 2018 and 2019.

The Spunge's name may come from the Sponge, probably because the two creatures are able to absorb air and water.