My Singing Monsters Wiki
Register
Don't have an account?
Sign In
Advertisement
in: Rare Monsters, Plant, Earth,
and 12 more

The Rare Shrubb has a blue bushy body. Instead of flowers, stumps and three tree branches with blue-green leaves grow from its back. It has long dreadlock-like hair that covers its face. It has blue toenails with patches of blue turf on its feet.

The Rare Shrubb can be bred the same way as a regular Shrubb. The combination is:

Any kind of breeding attempt which includes a regular Shrubb may fail, and give a Rare Shrubb as a result instead of the regular Shrubb. This includes all of the breeding combinations that can't ever work in the usual way.

Rare Shrubb, like all Rare Naturals and Fire Monsters are only available for breeding and buying some of the time during special events. Examples of such events:

To see how efficient Rare Shrubb is at generating resources compared to other monsters check:

On October 28th, 2016, the Rare Shrubb finally dressed up. Like its common counterpart, it dressed up as a clown, styling multiple colors. It has green dreadlocks and shoes with green swirls. Instead of having spots, it has triangles. This outfit was repeated for the 2017, 2018 and 2019 seasons. 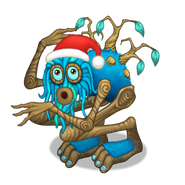 In December 2015, the Rare Shrubb wanted to mimic its common counterpart and it too, put on a Santa hat. This was repeated for all subsequent seasons.