Rare Scups have the same peculiar body shape of their Common counterparts, but outside of that they are much weirder, as they have:

The Scups can be bred using Monsters that combine to provide all the elements of Air, Earth and Water. Possible combinations:

Because Tweedle and Fwog take much less time to hatch than both Quibble and Cybop, the first combination will provide more breeding opportunities in the same time period (on average).

The Rare version of any breeding Monster can be used instead of the Common version.

Rare Scups, like all Rare Naturals and Fire Monsters are only available for breeding and buying some of the time during special events. Examples of such events:

To see how efficient Rare Scups is at generating resources compared to other monsters check: 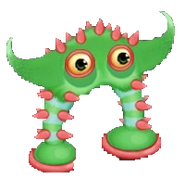 In December 2015, the Rare Scups changed colors to match its common counterpart. This was repeated in the 2018 season and 2019 season.