My Singing Monsters Wiki
Register
Don't have an account?
Sign In
Advertisement
in: Rare Monsters, Rarethereal, Mech,
and 11 more

Rare Reebro was released on September 16th, 2016 along with the Rare Jeeode.

The Rare Reebro is an aqua and sky blue colored brain, protected by its helmet, which is two different shades of gray: a light metallic gray and gunmetal gray with transparent orange visors and small windows on the sides. Its face is pacific blue. The base and bottom exhaust of its mech suit remains the same, save for the extra pair of exhaust pipes, which do nothing. Its legs remain with gunmetal gray except with the metallic gray at the fourth segment on its legs. In addition, the feet have extra LEDs, cerulian bottoms, and 3 toes each.

Like all other Rares, Rare Reebro is only available for breeding during short time periods announced in the game.

Like its Common counterpart, the Rare Reebro can be bred on Air Island using a combination of Riff and a three-element monster. Possible combinations:

Failed breeding results are one of the parent monsters, or a normal Reebro. For the shortest wait time per attempt, Riff and T-Rox is recommended. The Rare Reebro's chances of breeding are less than the common Reebro's. Wishing Torches will increase the chance of success, and so will using high level monsters. The Rare version of any monster can be used for breeding instead of the common version.

Rare Reebro, like all Rarethereals are only available for breeding and buying some of the time during special events, typically during the weekend. Examples:

Each monster needs to be fed four times before it reaches the next level. Increasing the monster's level increases the shards earned per hour, as well as the maximum shards earned.

To see how efficient Rare Reebro is at generating resources compared to other monsters check: 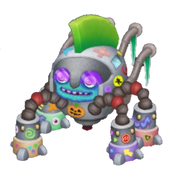 In 2018 and 2019, Rare Reebro donned a similar costume to its common counterpart; with a green mohawk and more 'tattoos'.