My Singing Monsters Wiki
Register
Don't have an account?
Sign In
Advertisement
in: Rare Monsters, Mirror Islands, Earth,
and 10 more

The Rare Pummel is similar to the regular Pummel.  It is red/orange instead of blue, has six arms instead of four, has two fins on its back instead of just one, and has small yellow 'growths' on its sides. It lacks spots. And it's fins make it look like a cat's ears

The Rare Pummel monster can only can be bred or purchased during specific weekend events. Its parentage is the same as the regular Pummel. Possible combination(s):

Another good strategy is to breed the Common monster with a single-element monster, as single-elements take the least time to hatch.

Rare Pummel, like all Rare Naturals and Fire Monsters are only available for breeding and buying some of the time during special events. Examples of such events:

To see how efficient Rare Pummel is at generating resources compared to other monsters check: 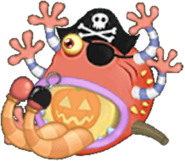 Also in October 2015, the Rare Pummel wore a pirate's outfit. It has an eyepatch, a hook on one of its tongues, a pirate hat on its head replacing the fins, striped sleeves, and a peg leg. Like its counterpart, it has a pumpkin on its mouth. This outfit was repeated for every subsequent season. 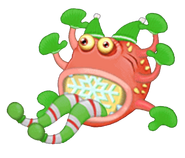 On December 2nd, 2016, the Rare Pummel dressed up. This was the first time that the Rare Pummel put on an outfit for the Christmas season. It has green hats, mittens and green, red and white tongues. It has a snowflake on its drum. This was repeated in all subsequent seasons.