If Available, any pair of the following:

The Rare Noggin is very different from its original counterpart. It has gold colored hands and feet with purple toenails. It has two golden small tusks with a small portion painted purple as well. The most notable difference is that the Rare Noggin is cube shaped with gold trimming on the edges and corners, along with its purple eyes. It also lacks a jaw. The Rare Noggin also has smooth, gray, lightly cracked stone in between the golden trimming on its edges.

The Rare Noggin may result from breeding any two distinct triple-element monsters that share the Earth element. These include:

It takes 6 hours to breed, and 6 more to incubate. On Plant Island, be careful when using the T-Rox and Pummel combination, as it could make a G'Joob instead. On Air Island, using a combination of T-Rox and Scups could create a Yawstrich instead.

Also, it is advised to use these breeding combos on their respective Magical Islands due to the decreased breeding time compared to the standard Triple Element Fire monsters.

Rare Noggin, like all Rare Naturals and Fire Monsters are only available for breeding and buying some of the time during special events. Examples of such events:

Earning rate is in coins per hour and depends on Happiness % (Likes increase Happiness), also each monster has a limit to how much income it can hold at a time. Increasing the monster's level increases the limit

) of Rare Noggin varies by Island:

To see how efficient Rare Noggin is at generating resources compared to other monsters check: 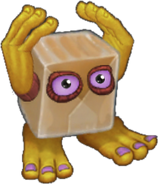