If Available, any pair of the following:

Any pair of three-element monsters, as long as they both have the Cold element, can potentially breed a Rare Mammott. The Rare Mammott may be produced by combining the following monsters on islands where both can be found:

In addition to this list, it's possible to breed one on Shugabush Island using a regular Mammott and Shugabush. However, it may be easier to breed a second Rare Mammott on a different island and teleport it to Shugabush Island (after feeding it to Level 15). This is because the Shugarock could be made in Shugabush Island, and Shugarocks take a very long time to push through the Breeding Structure and the Nursery.

Just as the Mammott + Shugabush combination in Shugabush Island is not the best solution, it is not advised to breed a Clamble and Bowgart on Plant Island since it is the same combination as a Shugabush, which takes a very long time to get through the Breeding Structure and the Nursery. It is also not best to use Congle and Thumpies on Cold Island during the Festival of Yay, because it is the combo for Yool. And during Spooktacle, avoid the Bowgart + T-Rox combo, because you are likely to get a Punkleton.

It is advised to use these breeding combos on their respective Magical Islands due to the decreased breeding time compared to the standard Triple Element Fire monsters.

Rare Mammott, like all Rare Naturals and Fire Monsters are only available for breeding and buying some of the time during special events. Examples of such events:

Every monster has different things that they like. For every unique object that they like that's placed near the monster, the monster's happiness will increase by 25%. Placing more than one of the same liked item near a monster will still only increase its happiness by 25%. If there's a Unity Tree on the island, items don't need to be near the monsters. Below are the things liked by Rare Mammott:

) of Rare Mammott varies by Island:

To see how efficient Rare Mammott is at generating resources compared to other monsters check: 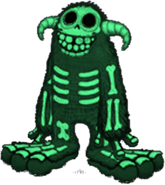 In October 2015, the Rare Mammott wore the same costume as its common counterpart except it glowed green. This outfit was repeated for every subsequent Spooktacle.