The Rare Hoola was the first Rare Seasonal Monster to be introduced to the game. It arrived on July 16th, 2016 during the SummerSong celebration.

The Rare Hoola like all Seasonals is only available for breeding during short time periods announced in the game.

There is only one combination:

Rare Hoola, like all Rare Seasonals are only available for short durations during their own season, a weekend Out-of-Season event (6 months apart) and during the Anniversary Month Celebration.

For 2016, the breeding availability periods were from:

For 2017, the breeding availability periods were from:

For 2018, the breeding availability periods were from:

For 2019, the breeding availability periods were from:

NOTE: The Rare Hoola can only be bred or purchased during the dates listed above. Any Rare Hoola on Air Island, Earth Island, and their Mirror Islands that is obtained during the above times will stay unless it is sold.

To see how efficient Rare Hoola is at generating resources compared to other monsters check: 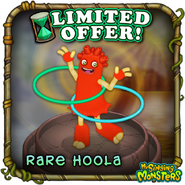