My Singing Monsters Wiki
Register
Don't have an account?
Sign In
Advertisement
in: Rare Monsters, Mirror Islands, Earth,
and 12 more

The overall body shape of the Rare Fwog is similar to the Common variety. It is golden in color, with hollow toes and twisted horns.  The crystals on its back are sharper than those of a regular Fwog, and are red, green, blue and purple. Where the center eye was, is now a dog nose. The Rare Fwog also has teeth, which are only visible when it sings. Behind the right leg shows some spikes.

The Rare Fwog Monster can be bred using a water-element monster and an earth-element monster. Its parentage is identical to its more common relatives. The combination is:

Any kind of breeding attempt which includes a regular Fwog may fail, and give a Rare Fwog as a result instead of the regular Fwog.  This includes all of the breeding combinations that can't ever work in the usual way.

Rare Fwog, like all Rare Naturals and Fire Monsters are only available for breeding and buying some of the time during special events. Examples of such events:

To see how efficient Rare Fwog is at generating resources compared to other monsters check: 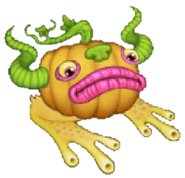