The Rare Entbrat is the same size and shape as the Common Entbrat, but has an autumn-like appearance, with gold, orange and red replacing yellow and bright green. The larger horns, more notably the side horns, and longer 'beard' of leaves on its chest give the Rare Entbrat a different appearance as well.

The Rare Entbrat is bred like the Common Entbrat, using monsters that combine to provide all four elements, Earth, Cold, Plant, and Water.

The following pairs of 2-element monsters can be used to breed an Entbrat:

However, the combination of a 3-element with 1-element monster has a higher rate of success for getting an Entbrat instead of one of the parents as the outcome:

You can also breed it with an Entbrat and a 2-element monster
Of these, T-Rox+Potbelly and Bowgart+Noggin are the best combinations, as they have the lowest average breeding times in case of breeding failure.

There is also a small chance of producing a Entbrat or Rare Entbrat from a failed breeding attempt, using an Entbrat and a non-Single Element Monsters.

The Rare version of any monster can be used for breeding instead of the common version. In addition, it is possible to breed a Rare Entbrat and a regular Entbrat together.  The outcome will always be a Entbrat, and if a Rare Entbrat is available at that time, it may result from this combination.

Rare Entbrat, like all Rare Naturals and Fire Monsters are only available for breeding and buying some of the time during special events. Examples of such events:

More info can be found in this article.

Every monster has different things that they like. For every unique object that they like that's placed near the monster, the monster's happiness will increase by 25%. Placing more than one of the same liked item near a monster will still only increase its happiness by 25%. If there's a Unity Tree on the island, items don't need to be near the monsters. Below are the things liked by Rare Entbrat:

To see how efficient Rare Entbrat is at generating resources compared to other monsters check: 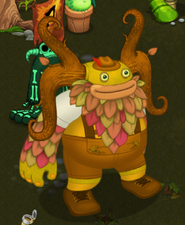 Spooktacle 2019
Add a photo to this gallery

On October 22nd, 2016, the Rare Entbrat mimicked its common counterpart and wore lederhosen. The skin and leaves remained of similar color until 2019. The costume was repeated for all subsequent seasons.

Retrieved from "https://mysingingmonsters.fandom.com/wiki/Rare_Entbrat?oldid=331893"
Community content is available under CC-BY-SA unless otherwise noted.