The Rare Congle has the same body, arms, hands and shell/drum as its Common counterpart. Otherwise, it looks different from the regular Congle. It has orange fur on its head that sticks up, similar to some human hair. Its eyes are on its face, not on stalks. It also has small horns, green feet, and green wings (or ears?).

The Breeding for the Rare Congle is the same as the Congle's breeding. Possible combinations are:

Another good strategy is to breed the Common Monster with a single-element monster, as single-elements take the least time to hatch.

The Rare version of any breeding Monster can be used instead of the Common version.

Rare Congle, like all Rare Naturals and Fire Monsters are only available for breeding and buying some of the time during special events. Examples of such events:

To see how efficient Rare Congle is at generating resources compared to other monsters check: 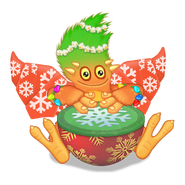 On December 2nd, 2016, the Rare Congle's hair got a green tint and its wings got wrapped in red-and-white gift wrap. Like its common counterpart, colorful lights were added to its hands and arms and its drum color also changed to red with gold flakes and green with a white flake on top. It appears to have popcorn strings in its hair. This was the first time the Rare Congle put on an outfit for any season and was repeated for all subsequent seasons.