My Singing Monsters Wiki
Register
Don't have an account?
Sign In
Advertisement
in: Islands, Psychic Island, Titans,
and 2 more

Psychic Island is a Magical Island in My Singing Monsters inhabited by Psychic Monsters.

At the time of release, only three Elements of Psychic Island were present, leaving the Island with only 7 Monsters, instead of the usual 15, and no quad-Element Monster.

The team challenges spanned polls, art requests, and hashtag storms, with each reviewed by the Monster-handlers to determine which team won, as well as a separate request for Fire Frontier Monsters' sounds to be played by the community in a "Play Your Part" collaboration.

These challenges led many in the community to believe that whichever Element's team 'won' would be the Element to be added to Fire Frontier - a notion that was not dispelled by the Monster-handlers during the time of these challenges.

However, on September 25th, 2019, it was announced that a new element - Psychic - had been created for the Island, with new Monsters with the respective Element along with the Elements already established, and Fire Frontier was renamed to Psychic Island, as shown in the reveal video which includes some of the entries to the "Play Your Part" collab.

In My Singing Monsters Live Episode 47 it was revealed that while the Monsters that found the Island thought it a good place for a new Fire Island (thus Fire Frontier), the Psychic Monsters had been there all along, and essentially stated "Hello! Just so you know.. this is Psychic Island".

During the same episode, the 'competition' was described as:

No winning Team was officially announced, though an early official poll showed #TeamCold leading, and community efforts to find which team had the most support by the end showed it continuing to have the upper hand by a comfortable margin, with #TeamEarth in second place, and #TeamAir trailing far behind.

The Monsters of Psychic Island are of the Fire, Plant, Water, and Psychic elements. Since Psychic Island lacks the Earth, Cold, Air, Light, Faerie and Bone elements, no monster with these elements can exist on it. Just as with Fire Haven and Fire Oasis, there is also a difference with monsters that have the Fire element, as they take longer to breed and more difficult to obtain because of their long absence from the monster world; this also applies to the newly introduced Psychic Monsters.

There are currently no Special Occasions in Psychic Island.

The song plays at ♩ = 130 in 4/4 time. Psychic Island's key signature is A minor and G mixolydian.

an eye for an eye 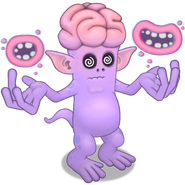 Theremind, the monster with the Psychic Element