Prismatic Monsters (Prismatics) are monsters exclusive to the game Dawn of Fire. They are portrayed by a monster plus a certain tint of either Red, Orange, Yellow, Green, Blue, or Purple coming from the Prisment color. When an adult monster enters the Prism Gate, it turns into a Prismatic Monster. Each Monster has six unique colorful forms from the six colors of the rainbow (Red, Orange, Yellow, Green, Blue, and Purple). You can increase the chances of a specific color by putting one of the six different colored Prisments in. You cannot return a Prismatic Monster to its normal form. However, if you have a normal monster and use a low amount of Prisments, the monster will usually remain on its original form.

The rarity and change time for each Prismatic Monster seem to depend on what color the original monster is. 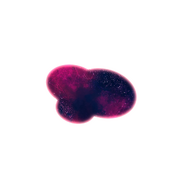 A Prism Gate without Surrounding Prisments

The first 2 sets of Prismatic Monsters

The 1st 15 sets of Prismatics