My Singing Monsters Wiki
Register
Don't have an account?
Sign In
Advertisement
in: Monsters, Air, Earth,
and 15 more

The PomPom is a pink furry humanoid creature with pink pompoms. Its legs, arms, and feet are peach with orange stripes, and on its legs it has pink fur resembling leg warmers. Its "hair" is tied into two pigtails at the sides of its head and it has a tuft of pink sticking out at the top. It looks and behaves much like a human cheerleader.

When this monster is idle, it stays in tempo by marching in place and periodically jumping in cheer.

The PomPom Monster's contribution to an island's song is a high-spirited cheer that adds to the melody, and differs by island:

The PomPom Monster can be bred using monsters that combine to provide all the elements of Air, Earth and Cold. Possible combinations:

Because Tweedle and Drumpler take much less time to hatch than both Pango and Cybop, the first combination will provide more breeding opportunities in the same time period (on average).

On Shugabush Island, the PomPom must either be purchased with diamonds or teleported from any other island it is found on (not including Gold) once it reaches level 15.

While trying to breed other monsters (particularly monsters with a very low chance of breeding), the following Wublins can be used to "dispose of" PomPom eggs immediately instead of putting them into a Nursery and having that Nursery not be available.

While trying to breed other Monsters (particularly Monsters with a very low chance of breeding), the following Celestials can be used to "dispose of" PomPom eggs immediately instead of putting them into a Nursery and having that Nursery not be available.

To see how efficient PomPom is at generating resources compared to other monsters check:

The name "PomPom" references the colorful pompoms in the monsters' hands.

To see all possible names for PomPom, see Monster Names. 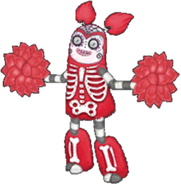 On October 24th, 2013, The PomPom disguised itself as a green alien. It has blue limbs, with antennae instead of pigtails and eyes on its pom-poms. This outfit was repeated for the 2014 season. For the 2015 season, the PomPom turned red and its skeletal system was visible, with black and white arms, spikier pompoms and a skull resembling those used on the Day of the Dead on its face. This outfit was repeated for every subsequent season up to 2019.