Plant Island is a Natural Island.

) is the first Natural Island and the first island available to the player in My Singing Monsters. The Plant Element (

) is manifested on this island. Plant Island has a total monster count of 65. 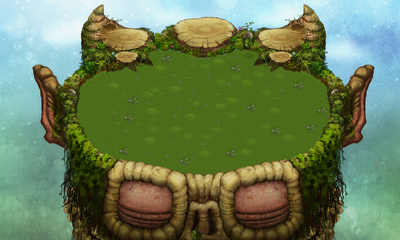 The monsters of Plant Island are of the Earth, Cold, Water, and Plant elements. Since Plant Island lacks the Air element, no monster with that element can exist on it. (the island itself already has the air)

The full Plant Island song is available on iTunes for download. The Plant Island's song, like that of Earth Island, is in the key of C Harmonic Minor Bebop. The song plays at 140 beats per minute.

Main Article: Castle
To be placed on an island, each monster requires a specific number of beds. For Natural Monsters, this is equal to the number of elements that monster represents. Ethereal, Supernatural, Legendary, Seasonal, Mythical, and Rare (only the Rare Wubbox) Monsters each have varied bed requirements. Upgrade the Castle to unlock more beds.

During the holiday season of Spooktacle, Plant Island is adorned with Spooktacle decorations. As part of the Spooktacle celebration, all obstacles are changed to seasonal versions. Several monsters also dress up in costume for the duration of the holiday. Some monsters also dress up for the Yay season, however, Plant Island does not change during that time. To see monster costumes go here.