) is an Outer Island in Dawn of Fire that contains only the adult version of certain monsters. Out of the four Outer Islands, Party Island has the lowest level restriction, level 5, for monster teleportation. Baby Monsters from the Continent can be placed in the Teleporter under the Party Island heading once they reach level 5. As the baby monster teleports to Party Island, it transforms into its adult version. There are currently 17 different monsters, (excluding Prismatic Monsters), that can be teleported to Party Island. 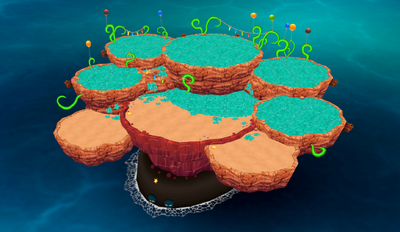 Above the ocean, Party Island can be seen with its many cliffs, encompassed by 8 platforms: one significantly large one, surrounded by seven other platforms to it's side. The floors of the upper platforms appear to have cyan-colored grass while the large platform is a mixture of cyan grass and a bare tan. The other platforms also have brown edges while that of the large platform is maroon. The edges of the upper platforms contain green vine-like objects that support multiple balloons and pennant banners. Stars and confetti are also strewn across all of Party Island's platforms.

A creature, called a Glubpole (Glubber + Tadpole) can be seen below the front platform which supports the entire island, just as the islands in MSM are supported by Colossals. What can be seen of it is dark-brown, and it has navy blue eyelids. On its forehead lies a star along with six red specks right above it. Most importantly, on the sides of the platforms, cannons are noticeable, which occasionally shoot arrays of confetti into the sky that slowly dissipate into the air, resembling a "party."

The monsters of Party Island, like the rest of the Outer Islands, are of the Natural Elements: Earth, Cold, Water, Plant, Air, and Fire.

The Party Island song is in the key of C major and it plays at approximately 160 (80) beats per minute.

The Mammott, Edamimi, Noggin, Ziggurab, and Potbelly initially play their parts in the song. Oaktopus sing its part also. At the half-way point of the first measure, Shrubb joins in with its part. The other monsters repeat their parts sung at the start of the song, while Ziggurab continues playing its part for the rest of the song.

In the final half, the song repeats, but Potbelly and Oaktopus do not play and PomPom and Quibble join the song.

After that, Noggin, Candelavra, and Maw sing their respective parts.

This measure is repeated by Mammott, Noggin, Shrubb, Pompom, Edamimi, and Quibble but Potbelly and Oaktopus return.

For the last measure, Maw, Stogg, Kayna, Quibble, T-Rox, Candelavra, Furcorn, Quarrister, and PomPom play until the end of the song, which then repeats. Noggin and Scups didn't play in that part.