My Singing Monsters Wiki
Register
Don't have an account?
Sign In
Advertisement
in: Monsters, Plant, Water,
and 16 more

The Oaktopus looks like a brown tree with tentacles and a face, similar to Treebeard from The Lord of the Rings. It has two teeth on its upper jaw, bulging yellow eyes, red lips and a nose, and a blue tongue. It has a beak (a feature that octopi possess) on the corner of its mouth and a wooden beard. Upon its head are two tufts of foliage (acting like hair) which strongly bear a resemblance to the PomPom's pompoms. On Shugabush Island, a nest with green bird-like creatures is found on its left "hair" tuft.

When this monster is idle, it stays in tempo by pondering-ish eye-shifting like the Toe Jammer and jerking its root-like tentacles.

The Oaktopus can be produced by breeding monsters with the elements of Plant and Water.

On Shugabush Island, the Oaktopus must either be purchased with diamonds or teleported from any other island it is found on (not including Gold) once it reaches level 15.

While trying to breed other monsters (particularly monsters with a very low chance of breeding), the following Wublins can be used to "dispose of" Oaktopus eggs immediately instead of putting them into a Nursery and having that Nursery not be available.

While trying to breed other Monsters (particularly Monsters with a very low chance of breeding), the following Celestials can be used to "dispose of" Oaktopus eggs immediately instead of putting them into a Nursery and having that Nursery not be available.

To see how efficient Oaktopus is at generating resources compared to other monsters check:

"Oaktopus" is possibly a portmanteau between Oak Tree and Octopus.

To see all possible names for Oaktopus, see Monster Names. 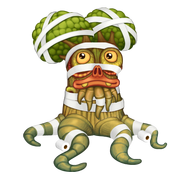 On October 30th, 2012, the Oaktopus was TP'ed, similar to the Spooktacle Trees on Plant Island. The Oaktopus wore this outfit again for the 2013 and 2014 season.