Noggins are single element Natural Monsters. They are the embodiment of the Earth element.

Interestingly, Noggins' hearing is very poor, owing mainly to the fact that they have no ears. Instead, this Monster is able to "hear" through sensitive receptors in their hands and feet, which pick up the tiniest vibrations. In this way, a Noggin is able to rhythmically follow the heartbeat of the island and reproduce it by tapping its fingers on the hollow top of its flat head.

When the Monster is idle, it stays in tempo by briefly stroking its fingers across its head and slowly stomping its feet.

The Noggin contributes to its Island's song by playing a variety of Latin-based drums (a bass drum on Earth Island), the exact instrument varying from Island to Island. Its hands beat a rhythm onto the top of its head, which creates the sound that it plays. On Faerie Island, Noggin also stomps along with its feet, (thought it could just move its feet and make the sound with its mouth) creating a lower sound.

The Noggin is the first monster available for purchase in the market. They can also be produced by breeding an unstable combination between a Noggin and a monster with more than one element.

While trying to breed other monsters (particularly monsters with a very low chance of breeding), the following Wublins can be used to "dispose of" Noggin eggs immediately instead of putting them into a Nursery and having that Nursery not be available.

While trying to breed other Monsters (particularly Monsters with a very low chance of breeding), the following Celestials can be used to "dispose of" Noggin eggs immediately instead of putting them into a Nursery and having that Nursery not be available.

To see how efficient Noggin is at generating resources compared to other monsters check:

"Noggin" is a slang for head. As this Monster is mostly head with almost no sign of limbs, its name might come from this informal word.

To see all possible names for Noggin, see Monster Names. 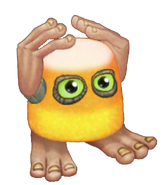 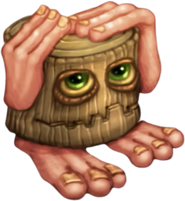