The News was where all new information within My Singing Monsters could be found. It has since been replaced by Mailbox, in Version 2.1.0. This included, but was not limited to, promotions, new merchandise, system messages and links to the MSM social media accounts. Promotions such as Daily Deals, a Rare Duet, and special events were also located in the News tab. To view an article in the News, one would've had to tap "View" to the right of the article.

Articles in the News were classified by five different symbols: the star, the hourglass, the newspaper, the traffic cone, and social.

The star (🌟) symbol designated the release of something new such as a new monster or MSM merchandise.

Articles with the hourglass (⌛) symbol meant the promotion was only for a limited amount of time.

The newspaper (📰) symbol was used for player polls and MSM gear.

The traffic cone () symbol was used for system messages that indicated technical changes such as the discontinuation of Community Codes.

The social (👫) symbol meant the article related to something community-oriented such as community competitions.

The MSM social media accounts were also designated by the social symbol.

Social
Add a photo to this gallery

On some devices, the News button would become "buggy" and not respond or be slow to player command.

If the problem persists for a while, the My Singing Monsters' Facebook Page or Twitter Page would be used to search for the desired info, as posts were made as soon as in-game changes are done. 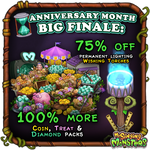 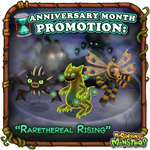 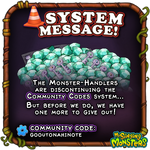 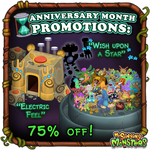 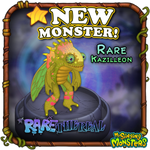 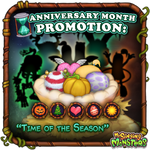 Retrieved from "https://mysingingmonsters.fandom.com/wiki/News?oldid=307561"
Community content is available under CC-BY-SA unless otherwise noted.