My Singing Monsters is the original game of the My Singing Monsters franchise and the sequel to My Singing Monsters: Dawn of Fire. It is a world builder simulation game where the player develops groups of monsters which sing and play music. The game has been released for iOS, Android, Amazon, PlayStation Vita and Windows platforms. The game was published by Big Blue Bubble with support of the Canada Media Fund on September 4th, 2012. Since then, there were many updates to the game that allows enhancing of the sound and visual qualities of the game.

There are currently twenty one islands the player can visit and have monsters on, each one with a specific set of native monsters:

Plant, Cold, Air, Water, and Earth Islands are the "Natural Islands", as they only require purchasing Single Element Monsters and breeding to populate the island. The Mirror Islands are mirror versions of the Natural Islands, only with a slightly different appearance. Gold Island is where monsters are placed once they have leveled to fifteen. No currency is produced on Gold Island, so it is mainly to show off. The Ethereal and Shugabush Islands require teleporting monsters from the Natural Islands to begin breeding (Single element Ethereals and the Shugabush, respectively). Tribal Island is a place for players to form a Tribe and get as many members as possible to complete the song and unlock the mysterious Kayna. Wublin Island contains unique monsters, called Wublins, that need to be "awoken" by zapping eggs of the monsters found on the Natural Islands into their statues. Composer Island is very different than the other islands; it allows the player to create their own unique tunes for each Monster. Other attributes are that it is the largest island in the game, and multiple Monsters of the same species can have different songs.

Across each island is a unique themed song (excluding the Mirror Islands, which are the same as their no-mirror counterparts), made by the combinations of each Monster's tune. Most of the songs are generally between one and two minutes long, and consist of a combination of singing, percussion, and tuned instruments. Each song is played in 3D sound, which allows monsters to be heard distinctly from a certain side.

The Monsters are what the game is all about! There are currently 226 monsters found in the game and they are categorized into different groups: Natural, Ethereal, Supernatural, Legendary, Seasonal, Mythical (formerly known as PlayStation Vita Exclusive), Rare, Dipster, Celestial, Epic, and Magical. The Kayna, which is found in Tribal Island, fits in an undefined monster group in this game (although in the prequel of the game, it is revealed to be a Natural Monster).

Natural Monsters are the most widely seen in the game. They each have a different element configuration based on the elements that they do have. They can also be bred to make more complex Monsters. However, the more elements the Monster has, the harder it is for them to be bred successfully.

Originally, there were five different elements that Natural Monsters could have: Plant, Cold, Air, Water and Earth. Four elements are available on each island, which means that certain monsters are not available on certain islands. A sixth natural element, Fire, was added later.  At first it manifested only in the Kayna who is located on Tribal Island, but it later became a Natural Element when Fire Haven was released.

Ethereal Monsters are much rarer than Natural Monsters.

The Wubbox can be purchased on every natural island and on Ethereal Island. Wublin statues or the Wubbox can be bought at Wublin Island which only become active monsters when woken up. Only the Wubbox is eligible to be placed on Gold Island.

Legendary (Shugafam) Monsters are only found on Shugabush Island, with the sole exception of the Shugabush itself, which is also found on Plant Island and can be placed on Gold Island. The Shugafam is based on country singer Kristian Bush and his band, Sugarland.

Mythical Monsters were originally only obtainable on PS Vita but are since Version 2.3.2 also available on Mobile (iOS and Android). They cannot be placed on Gold Island, and are only found on one Island each.

Werdos are rare Monsters that you can only buy with Relics. They sing English lyrics throughout the entire song. They are based on the voice actors of My Singing Monsters.

Rare Monsters are rarer versions of the Monsters found in My Singing Monsters. For more information about Rare Monsters, please see the Rare Monsters category. Oddly enough, the class "Rare" is a subclass of the class "Natural". However, the "Epic" class is not.

Celestials are Monsters that are exclusive to Celestial Island (unlocked at level 15). Like Wublins, they are bought from the Market and brought to life by zapping Natural Monster eggs to them. They are bought with Diamonds. There are 12 Celestials.

Magical Monsters are a newly-discovered type of monster discovered by Kayna and its companions as they were awaiting reinforcements on Fire Frontier. Like the Fire Monsters, there are no guarantees of getting these monsters on the first try. For more information about Magical Monsters, please see the Magical Monsters category. There are currently 24 Magical monsters.

The main currency is Coins, which can be used to:

There are other types of Currency, which can be obtained with specific means. See the main page for details.

Decorations are purely cosmetic items which can be used to "spruce up" an island, making it more pleasing for players to watch.

Decorations mostly have no special effect, other than increasing a monster's happiness meter, but some decorations can either emit sound (e.g. Harpsitree) or have unique animations (e.g.Tub Fountain).

Structures, unlike decorations, have a defined purpose in the game, such as storing unwanted monsters or decorations. Some of them are essential for in-game progress and should be bought right away, such as the Breeding Structure.

Most structures can be bought with in-game money (coins), but some of them, called Premium Structures, are purchasable only after an in-app purchase has been made with real cash. There are free alternatives for some of these, so purchasing them is advised if a player is willing to help the developers of the game, and has no restrictions.

On Android-based devices, a minimum of Samsung Galaxy TBA is required. Samsung Galaxy S4 works fairly good with My Singing Monsters, in that it runs fairly fast and crashes pretty rarely, however, some animations such as Dipsters "jumping" animations do not run properly. 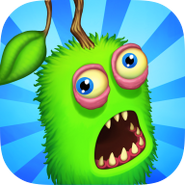 The My Singing Monsters logo in iOS since Version 1.4.2 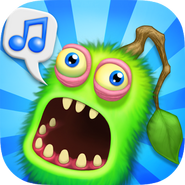 The My Singing Monsters logo in Android since Version 1.4.2 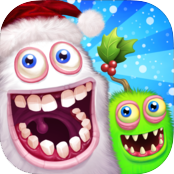 The My Singing Monsters logo on 1.3.7 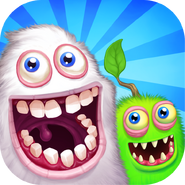 The original My Singing Monsters icon

My Singing Monsters wordmark with monsters around, sometimes featured instead of the standard wordmark 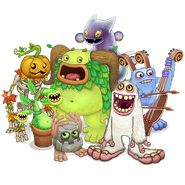 Plant Island Ensemble of Monsters
Add a photo to this gallery

Retrieved from "https://mysingingmonsters.fandom.com/wiki/My_Singing_Monsters_(Original_Game)?oldid=308265"
Community content is available under CC-BY-SA unless otherwise noted.