My Singing Monsters: Dawn of Fire

My Singing Monsters:
Dawn of Fire

Differences from the Original Game

The Continent consists of five of the original natural islands together. They all share the same song, no matter where the monsters are placed, and monsters are unrestricted from moving to particular sections of the Continent.

More Outer Islands will most likely be added in the future.

Using the existing elements in Dawn of Fire, there are some elemental combinations that are not used, but could be in the future:

Here is an image showing all possible combinations of Monsters in Dawn Of Fire, and some other facts:

Monsters not in Dawn of Fire

Many monster classes from the original game do not appear in Dawn of Fire, but (with the exceptions of Wubbox, its rare and epic counterparts and the Wublins) might be added in future updates alongside the remaining Natural element combos:

For iOS-based devices, at least iOS 7.0 is required. It is optimized for iPhone 5, iPad 3, iPod Touch 5 and iPad Mini 2. Dawn of Fire will not guarantee a good gaming experience with older models, and those devices include the iPhone 4, iPhone 4S, iPad 2 and the iPad Mini 1. Although it never mentions optimization for iPad Air or iPad Air 2, they may be able to play Dawn of Fire still in a satisfactory interface. On devices that are not optimized but still compatible with Dawn of Fire may have, for example, unclean and unstable loading of content in the game, fewer frames per second, and a much slower run of the application than the players' satisfactory speed. 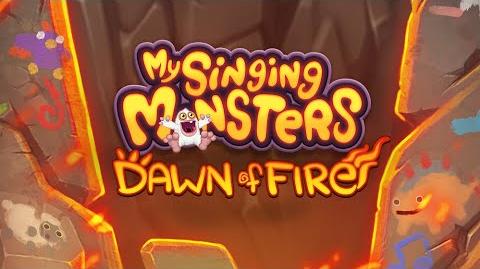 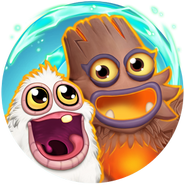 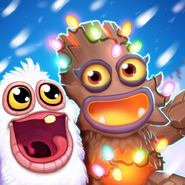 Screenshot of the Shop submenu (no longer called Market)

Image of the app presented on the App Store

A closeup of some of the available monsters in the game.

A view of the Earth Lands and Water Lands respectively

A Woolabee teleports to Cloud Island and becomes an adult
PerfectlyTimedPhoto.png
Some adult monsters in Cloud Island

Some adult monsters in Space Island

Screenshot after a player has made an in-app purchase