The Mute button appears when a Monster is selected. When pressed, the monster stops playing their song and shows an animation of them sleeping, along with the quarter-note rests emanating from the monster. A muted monster can be unmuted which returns the monster to their normal behavior (i.e. singing and dancing). In Dawn of Fire, monsters have unique muting animations that play when they are muted, and some monsters, such as Quibble, Potbelly, and Thumpies give off two sets of quarter rests.

Monsters in My Singing Monsters still produce Currency while muted. This also applies to adult monsters in Dawn of Fire.

An alternative way of muting a monster is to turn their volume all the way down. This can be done by selecting the monster, clicking the Move button, adjusting the Volume slider all the way to the left, and clicking Confirm. The monster will still have its active appearance, but will not be audible. This is useful if the player wishes to keep the song extending properties on a certain monster, but does not want them to play their music.

This has always been in the original game, but it's been introduced to Dawn of Fire in Version 1.10.0.

Muted monsters in the Memory Game (except Spunge). 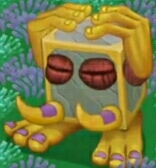 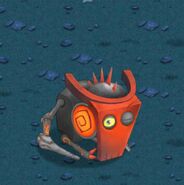 A muted Tympa with one eye open.

Muted Clackula
Add a photo to this gallery
Retrieved from "https://mysingingmonsters.fandom.com/wiki/Mute?oldid=306321"
Community content is available under CC-BY-SA unless otherwise noted.