Varies by device and company version 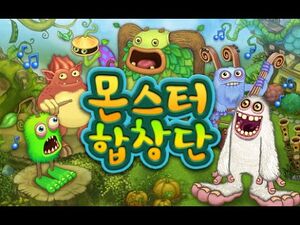 The gameplay for both versions are almost equal to when Rare Deedge was released (the only difference in 몬스터 합창단 interface-wise is the custom, "wooden" interface exclusive to 몬스터 합창단), but a feature that stands out, being the VIP Monsters and the Gacha Monster variations, which at the more you pay for VIP ''levels'' you unlock VIP Monsters.

A second minigame exists. You press buttons at the timing of the monsters, like guitar hero.

In 怪兽合唱团, it costs coins to breed monsters.

The Monsters are basically the same.  One difference is that there are "skins" for the monsters, such as a popsicle Furcorn, a bunny Pompom, and a "Minion" Mammott.

or use one gold ticket and 450

to buy 10 at one time. For summer-exclusive monsters that are only available on Plant Island, you must spend 50

or use a special rainbow ticket. In the VIP, the monsters that you unlock by paying are VIP Mammott, Pompom, Deedge, Wubbox, Maw and Ghazt.

Purple Noggin with Green Dots
Add a photo to this gallery

A more rocky style of Reebro

Gold Noggin
Add a photo to this gallery

Riff Variant 3 with text that says "Placeholder" in Chinese (was also used for Mailman Riff in version 1.3.0)

Potbelly Variant 4 with text that says "Placeholder" in Chinese (Only in version 1.3.0)

Oaktopus Variant 4 with text that says "Placeholder" in Chinese (was also used for Bok Choy Oaktopus in version 1.3.0) It is an early version of the Flower Oaktopus

T-Rox Variant 3 with text that says "Placeholder" in Chinese (was also used for Bamboo T-Rox in version 1.3.0)
Add a photo to this gallery

Rainbow Ticket (Korean)
Add a photo to this gallery

Art that contains a concept Reedling 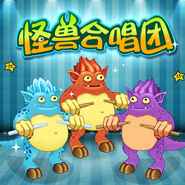 Art showing off the Drumpler skins

Art showing the Beats minigame
Add a photo to this gallery

Art showing Cold Island with many monster variants on it

There are currently multiple variations of the existing monsters, here are the pictures

Retrieved from "https://mysingingmonsters.fandom.com/wiki/Monster_Choir?oldid=307771"
Community content is available under CC-BY-SA unless otherwise noted.