Start a Wiki
The Memory Game is one of the minigames in My Singing Monsters.  It is played by tapping the Castle of any island (except for Gold Island, Tribal Island, Wublin Island, and Composer Island) then tapping "Memory". It costs 2

to play again before the 24-hour reset.

The player has to match cards to win. There will be two of each card per monster at every level, with more monsters being shown as the levels increase. Matching two cards of the same monster type will provide progress to the minigame. Any mismatches count towards the removal of mismatch chances. Running out of mismatch chances will lose the minigame.

The player may choose to leave the minigame or they may continue until they run out of mismatches. They may choose any prize, with the choices of prizes escalating depending on the number of levels won. Choices between coins, diamonds, food, relics, and keys are rewarded, similar to the rewards of the Spin Wheel or the former Scratch Ticket (before Version 2.1.8).

Before playing the Memory Game, there are some requirements. If there are less than four different monsters of at least Level 4 on the island, the game cannot be played. Memory Game can be played for free once a day, or players can pay 2

to play before the 24 hour reset.

The player will be asked to choose four Monsters out of those that are on the island before the game begins. Alternately, the player can let the game choose four random monsters.

The monsters will play a sequence which must be remembered, then repeated by tapping on the monsters in order. One more step is added to the sequence for every round. After round 10, there is a chance that a sound will be played by two monsters at the same time; these sounds must be repeated by tapping both monsters simultaneously with two fingers. The screen displays the current round number, the highest round number you've ever reached in past games, and the highest round number reached from amongst all My Singing Monsters players.

The game is lost by either playing the wrong monster, or by taking too long to make a move. Prizes will be awarded based on the last round successfully completed.

Based on how well you do, the rewards can typically range around 100-300 coins, 50-200 food, and an extra diamond if you beat your best. For new players, this reward is somewhat appealing, so playing the Memory Game will be worth your while. As you become a more developed player, the rewards quickly diminish in value, aside from the diamond given for beating your best. That is unfortunately the flaw with this mini-game. Developed players are not rewarded well for their memory and time, because the rewards stay the same, rather than going up with each level.

One diamond will be rewarded for beating your best, even if that best is as low as 1 or 2. If you wish for an extra diamond every day, then simply memorize one extra level until you cannot beat your best anymore.

For example, when you first play the Memory Game, your best will be at 0. Simply finish the first level and deliberately lose the next. You will get a diamond and have a best of 1. The next day, finish two levels which gives you a diamond and a best of 2. Continue doing this until you cannot beat your record anymore and you will see that the diamonds add up pretty well. 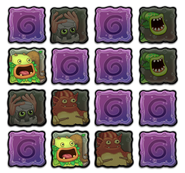 Memory game when you complete the game

The in-game Instructions for Memory Game

In the memory game (picture including Rares)

Selecting monsters in the Memory Game with the Rares in the catalogue (pre-2.0.3)

Retrieved from "https://mysingingmonsters.fandom.com/wiki/Memory_Game?oldid=304703"
Community content is available under CC-BY-SA unless otherwise noted.