Maw is a double-element Monster that is first unlocked on Plant Island. It is best obtained by breeding Mammott and Toe Jammer. By default, its breeding time is 30 minutes long. As a Double Elemental, Maw does not have a high coin production.

The Maw sings "deedee" or "dee" with its mouth, in an Alto key, often going to D♯/E♭4. Its sound can be easily distinguished among other monsters, and their contribution varies with each island.

The Maw also sings using syncopation, where it sings in a rhythm that is unusual to basic rhythms.

The Maw can be produced by breeding monsters with the elements of Cold and Water.

While trying to breed other Monsters (particularly Monsters with a very low chance of breeding), the following Wublins and Celestials can be used to "dispose of" Maw eggs immediately instead of putting them into a Nursery and having that Nursery not be available.

Note that bred Monster eggs can only be "disposed of" into inactive Wublins and Celestials; active ones do not accept Monster eggs. Also note that inactive Monsters to which you have already disposed the number of Maw eggs that it accepts, will no longer be available as a "recycle bin" for such eggs.

To see all possible names for Maw, see Monster Names.

A glitch where Maw was only rendered as a mouth 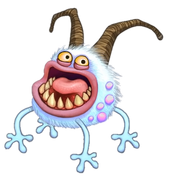