My Singing Monsters Wiki
Register
Don't have an account?
Sign In
Advertisement
in: Magical Islands, Islands, Psychic,
and 5 more
English

Magical Sanctum is a Magical Island in My Singing Monsters inhabited by Magical Monsters.

Magical Sanctum is a magical island that holds together all Single Element Magicals. When a single element magical monster has reached level 15, you can teleport it to this island. They will reset their levels and get sent to the nursery, and will also stay there permanently until sold.

Magical Sanctum is the first island to have all of the Magical Elements on it.

Magical Sanctum is the third Magical Island to be launched with the base collection (15 monsters) incomplete.

Its appearance is that of a Titan. It is furry with deer-like antlers that have small lanterns hung around them, dimly lighting the island. Warts come out of the island in the shape of rocks.

As of Enchantling's release, the Titan's antlers light up often, and it occasionally opens its eyes, which are bright blue with glowing white elliptical pupils. All of the antlers light up at once when its eyes are open. 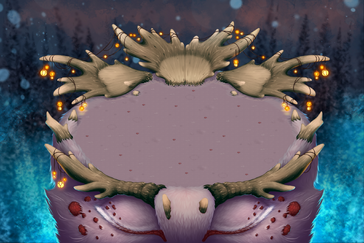 The Monsters of Magical Sanctum are of the Psychic, Bone, Light, and Faerie elements.

The song begins with Xyster and Knucklehead playing their first tracks. In the next part, Xyster and Knucklehead continue, while Floot Fly, Déjà-Jin, Osstax and Clackula (playing its first track) join in. The next part has all previous monsters, although Xyster and Clackula play their second tracks, while Cahoot and Mushaboom (playing its first track) join the song. In the next part, Floot Fly, Déjà-Jin, Osstax, Cahoot, and Clackula stop playing, while Xyster plays its third track, Knucklehead and Mushaboom begin playing their second tracks, and Larvaluss, Theremind, and Enchantling join in. In the next part, all previous monsters stop playing, with the exceptions of Knucklehead (going back to its first track) and Mushaboom (playing its third track). Frondley, Fluoress, and G'day join in with their first tracks, while Clackula joins back in with its first track. The next part is a repeat of the previous part that Cahoot was in, but without Déjà-Jin, and with Frondley continuing it's first track. The next part is a repeat of Larvaluss, Enchantling, and Theremind's parts, with the addition of Déjà-Jin. Halfway through, Clackula plays it's first track again, while Roarick joins in and Frondley, Fluoress, and G'day play their second tracks. The aforementioned part then repeats, with Frondley, Fluoress, G'day and Clackula playing from the beginning instead of midway through, and with Cahoot joining in.

This is a chart that shows where each monster plays in the song, each part is 16 beats long.

To be placed on an island, each monster requires a specific number of beds. For Natural Monsters, this is equal to the number of elements that the monster represents. Upgrade the Castle to unlock more beds. The Magical Sanctum castle available beds follow the pattern of the natural and magical island castles, and the cost for each upgrade follows the pattern of the Ethereal Island castle.

There are currently no Special Occasions on Magical Sanctum.

Magical Sanctum with no obstacles

Magical Sanctum illuminating after the release of Enchantling