My Singing Monsters Wiki
Register
Don't have an account?
Sign In
Advertisement
in: Articles with missing sections, Articles with incomplete sections, Islands,
and 4 more

Light Island is a Magical Island in My Singing Monsters inhabited by Light Monsters. It was first released on September 30, 2020.

Light Island replaces the Party Island of Dawn of Fire. It was launched in the last week of Anniversary Month 2020 and is the second Magical Island to be launched with the base collection (15 monsters) incomplete.

Its appearance is that of a Titan, almost all dark, with several tentacles of lights coming out around; its "eyes" are always open and it has 2 tentacles that resemble earrings in the ears. 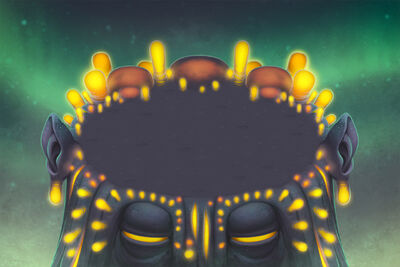 The Monsters of Light Island are of the Plant, Cold, Fire, and Light elements. Since Light Island lacks the Air, Earth, Water, Psychic, Faerie and Bone elements, no monster with these elements can exist on it. Just as with Fire Haven and Fire Oasis, there is also a difference with monsters that have the Fire element, as they take longer to breed and more difficult to obtain because of their long absence from the monster world; this also applies to the Magical Monsters.

The song of Light Island is in the key of A#/B♭ Major and at 80 BPM. It plays in 4/4 time signature.

Many fans had mixed opinions on Light Island's song. A lot of positive aspects of this song is that the song sounded peaceful due to the slow and relaxing tone compared to other islands (Fluoress and Fiddlement are good examples), while negative aspects included how repetitive and bloated the song can be, especially towards the end of the initial loop.

To be placed on an island, each monster requires a specific number of beds. For Natural Monsters, this is equal to the number of elements that the monster represents. Upgrade the Castle to unlock more beds.

There are currently no Special Occasions on Light Island.

Light Island in the Fabled Book of Monsters