This is the main article for Islands. For the category, see Category:Islands. 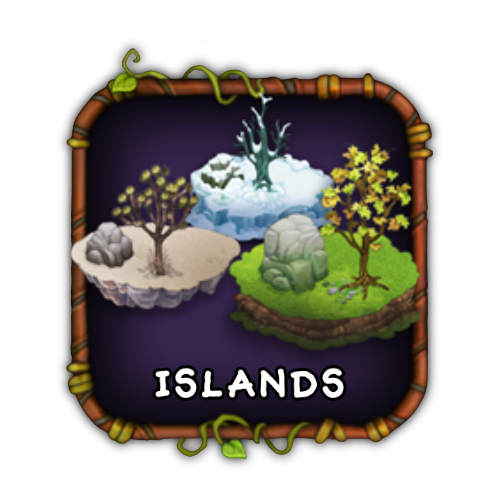 Islands are the places in the Monster World which certain kinds of Monsters are located, live, and sing depending on what elements they have. There are currently a total of twenty two islands (twenty six if you include the Mirror Islands): six of which are unique and sixteen (or twenty if you include the Mirror Islands) that are almost identical copies of other islands. Each island has a unique song that is produced by the Monsters who live there and work together. Most islands are covered with Obstacles, or trees and rocks, that need to be cleared in order to make more space. These trees and rocks will cost Coins (

) to be removed and Diamonds (

) to be added back to the island. As a special note, if the camera is zoomed all the way out from an island, a face can be seen on the front of it, which is the face of the island's Colossal or Titan.

The player first begins on Plant Island, as it is the only island unlocked at the start. To navigate between the other islands, the Map (

) is used, which is unlocked before Cold Island is bought. Buying Cold Island also frees the restriction on Gold Island, Ethereal Island, and opens up Air Island for Purchase. When Air Island is purchased, Shugabush Island becomes available, and Water Island is made purchasable. Water Island then allows for purchase of Earth Island, which allows for the purchase of Fire Haven. All Natural Islands, that is, those that manifest the elements of Plant (

), must be purchased in order after the player begins on Plant Island. The player must be at least Level 4 in order to purchase them. The Level 4 requirement also extends to the unlocking Gold Island, Ethereal Island, and Shugabush Island.

My Singing Monsters is published in multiple languages. A table of translations can be found at Island Translations.