The Hoola and the PomPom have similar shaped bodies and legs, with different colors. The Hoola has one larger ponytail, compared to the two on the Pompom's head. The Hoola's primary adornment is their bright red hoop, which they rotate vigorously around their body.

Hoola sings along with the PomPom to create a pleasant harmony. Hoola has a higher-pitched voice than the PomPom. Its chant is a variation of the PomPom's:

Hoola can only be bred for a limited time during the SummerSong season, as in the Northern Hemisphere or anytime in the Seasonal Shanty:

Seasonal Shanty: The Hoola can be bred with any combination of the following Monsters:

Hoola, like all Seasonals are only available during their own season, a weekend Out-of-Season event (6 months apart) and the Anniversary Month Celebration. It is also available to breed at any time on Seasonal Shanty.

Breeding times vary in the years for the main iOS and Android versions:

For other versions, this is different:

NOTE: Hoola can only be bred or purchased during the available dates. Any Hoolas on Air Island, Earth Island, or The Colossingum that are obtained during that time will stay unless they are sold. However, Hoola can be bought or bred on Seasonal Shanty at any time, though it is discounted when it is available on other islands. It is also obtainable via weekly Scratch Tickets on Air Island and Earth Island.

Earning rate is in coins per hour and depends on Happiness % (Likes increase Happiness). Also, each monster has a limit to how much income it can hold at a time. Increasing the monster's level increases the limit.

To see how efficient Hoola is at generating resources compared to other monsters check:

The name "Hoola" is derived from the hula hoop that the monster is always twirling around itself.

To see all possible names for Hoola, see Monster Names. 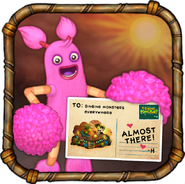 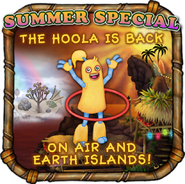