This is the main article for Gold Island. For the category, see Category:Gold Island.

Level 15 Natural, Seasonal, Shugabush and Wubbox; including both Rare and Epic versions. Teleported from Natural Islands (including Mirror) only.

Gold Island is also accessible at level 6 without any purchase in the Apple, Android and PC versions of the game. It was first released on November 27, 2012.

Gold Island exists in a different dimension from the Natural Islands, which is what enables the monsters to inhabit both their own native island as well as Gold Island. A monster's species, and its name, is the same on both islands because it is the same monster. Selling a monster on their native island will remove it from Gold Island as well. Any monster boxed on their 'home' island, or Teleported to Shugabush Island, will also be removed from Gold Island. 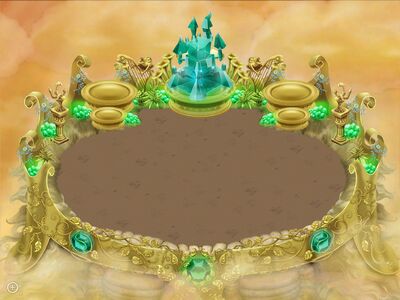 Most monsters can be placed on Gold Island once they reach level 15. These include:

The excluded monsters are:

Monsters which are in a Hotel Structure on their home island can also be placed on Gold Island. Even if these monsters are in the Hotel and inactive, they will be active and perform on Gold Island.

When monsters are placed, they remain on their 'home' island, still generating coins there unless they are placed into a Wubbox, in which case they are permanently removed from both Gold Island and their home island. Monsters on Gold island do not generate coins on the island, nor do they require decorations or feeding. They just sing.

Monsters on this island can be muted and are able to have their volumes changed as any other island.

Main Article: Obstacles
There are no rocks and trees to clear on Gold Island. No obstacles can be bought from the Market, as the Decorations and Structures section cannot be accessed.

There is only one type of castle, the Crystal Castle, which has unlimited beds.

During the Anniversary Month, which is the month of September, Gold Island is adorned with Anniversary decorations, as well has having its middle crown increasing its number every year on its anniversary.

Retrieved from "https://mysingingmonsters.fandom.com/wiki/Gold_Island?oldid=305095"
Community content is available under CC-BY-SA unless otherwise noted.