My Singing Monsters Wiki
Register
Don't have an account?
Sign In
in: Decorations, Spectral, Monsters,
and 2 more

A Glowbe resembles a light bulb with a single eye and two dangling arms. Small sparks orbit the central light inside their bulb. All Glowbes are the same size. They are available at level 13 and cost 1000

Glowbes can be placed on all islands except Tribal and Gold. A Glowbe has a single color, and blinks on and off in a user-programmable pattern. Glowbes are "conjured" in a structure called a Fuzer. Like the Glowbes, the Fuzer is unlocked at level 13. On Composer Island, a Fuzer is not needed and cannot be placed there.

Glowbes can be changed to adjust the timing of when each Glowbe illuminates. When the function is used wisely, it can have stunning effects on your island.

Glowbes first appeared on Composer Island in Version 2.0.6. They can be rearranged and form any possible set of visibly different Glowbe colors. They also occupy no beds at all and do not need food, as usual.

On Composer Island, Glowbes do not require fuzing. They can be bought as normal for 1000

each. Their colors can be altered by tapping on them and pressing "compose" to edit their timings of their colors. Using sharps and flats also modifies the color's appearance.

The following tables shows some of the color combinations.  Since it appears to be possible to combine any pair of Glowbes, creating finer and finer gradations of color, no table can show all of the possibilities.  It doesn't matter which color is on the right side and which is on the left.

These are the only three colors that are impossible to make. 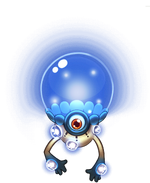 Tertiary colors are made by mixing one primary color with a secondary color, or vice-versa.

Quaternary colors are made by mixing one primary color with a tertiary color (vice-versa works too), or by mixing two secondary colors.

Senary colors are made either by mixing two tertiary colors, a secondary and quaternary color, or one primary with a quinary. Vice versa does work with the last two combinations.

Beyond Quinary and Senary

The Glowbes can be combined to virtually any level of color variation, but the number of possibilities increases geometrically.  With smaller differences between colors, it isn't possible to provide "recipes" that everybody can agree on -- people perceive color differently, and use color names differently. Of course, BBB can confirm the currently-discovered color names for Glowbes, but no one has contacted them about this or there isn't any official names made by BBB for the Glowbe colors.

Usually, when different-colored lights are combined, the result comes from an additive color scheme.  For example, on a television or computer monitor, red and green combine to give yellow.  However, the combinations of Glowbes work similar to, but not exactly the same as, a subtractive color system, as with mixing paints.  To predict what color will result from a given combination of Glowbes, you may find it useful to think of each Glowbe as having a white light inside, shining through a transparent colored shell.  The colors of the shells from the two "parents" would be mixed and painted onto the shell of the "child".

When you're combining multiple Glowbes, the order of the mixing is important because it affects the final proportions.  Blue and yellow combine to give a green: ½ blue and ½ yellow. If this is combined with red, the resulting red-brown color is ½ red, ¼ blue, and ¼ yellow. But if you combine red and yellow to give orange (½ red and ½ yellow) and then combine that with blue, you get indigo-blue from the ½ blue, ¼ red, and ¼ yellow.  Red and orange give reddish-orange: ¾ red, ¼ yellow.

If you managed to create a Glowbe that was ⅓ Red, ⅓ Yellow, and ⅓ Blue, you would end up with a Glowbe showing no color at all -- that is, 'White' (grey). It's mathematically impossible to get exactly ⅓R + ⅓Y + ⅓B, but you can get arbitrarily close with sufficient effort. Standard computer, tablet, and phone displays only use 8 bits to describe the color levels of red, green, and blue. That's a precision of 1 part in 256, or about 0.4%. This means that in practice, due to rounding, the percentages are allowed to be about 0.2% apart and still have the same display color values.

Any alternating Fuzing of one primary (Red, Yellow, or Blue) with its opposite secondary (Cyan, Magenta, Orange) Glowbe should quickly result in the required color mix. The below table uses the colors Blue and Orange. Due to the aforementioned display technology limitations, the first primary mix is repeated twice before alternating, which saves a few steps.

Orange = Red + Yellow. Always pre-fuse these before fusing with the results. E.g. Fusing Blue with Orange is not the same as fusing Blue with Red (giving Magenta), and then fusing Magenta with Yellow!

Community content is available under CC-BY-SA unless otherwise noted.