My Singing Monsters Wiki
Register
Don't have an account?
Sign In
Advertisement
in: Monsters, Plant, Cold,
and 15 more

The Furcorn resembles a fuzzy green cylinder-like ball with two straight stick-like twig legs. It has no arms and two large flat three-toed feet with lighter green short toenails on every toe. It has a gaping mouth with 10 visible yellowish pointed teeth, bulging eyes with blue pupils with a shine and a yellowish sclera, pink eyelids with bags underneath them, and a long crooked twig growing out of the top of its head, with a single leaf at the tip, and of course amazing vocals.

When this monster is idle, it stays in tempo by tapping its feet and hopping (showing its googly eyes).

The Furcorn's contribution to an island's song is a melodic falsetto warble. On

Shugabush Island Furcorn sings the same song as it does on

Plant Island but faster and at a different key signature. On

Earth Island, it harmonizes with the

Light Island, it plays a falsetto identical to that of a

The Furcorn can be produced by breeding monsters with the elements of Plant and Cold.

Gold) once it reaches level 15. You cannot breed Furcorn with Mammott and Potbelly on Shugabush island as the breeding combinations are all

While trying to breed other monsters (particularly monsters with a very low chance of breeding), the following Wublins can be used to "dispose of" Furcorn eggs immediately instead of putting them into a Nursery and having that Nursery not be available.

While trying to breed other Monsters (particularly Monsters with a very low chance of breeding), the following Celestials can be used to "dispose of" Furcorn eggs immediately instead of putting them into a Nursery and having that Nursery not be available.

To see how efficient Furcorn is at generating resources compared to other monsters check:

The name "Furcorn" appears to be a combination of "fur" or "furry" and either "corn" or "acorn," which is appropriate since it is a tiny, furry plant creature. "Corn" is an old word originally meaning "a single grain of a cereal plant".

To see all possible names for Furcorn, see Monster Names. 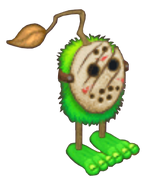 Gotta keep warm! On December 21st, 2012, the Furcorn put on warm red-and-white-striped socks to cover its bare feet. In addition, the Furcorn changed its leaf on its head to a sprig of holly. Furcorn has worn this outfit every Yay season until 2020.

1/5
Community content is available under CC-BY-SA unless otherwise noted.
Advertisement