My Singing Monsters Wiki
Register
Don't have an account?
Sign In
Advertisement
in: Monsters, Supernatural Monsters, Electricity,
and 7 more

Fleechwurm is the 19th Wublin. It is an aquamarine worm-like monster with several light sea green flat plates running down its back and up its tail, along with green spikes of the same color. It has seven dark green-blue holes on its side, with the most frontmost one containing an eye. It has four visible large front limbs in the shape of feathers, presumably six in all, that serve as its legs. four other smaller limbs are on its tail, covering the four holes found there. The tail seems to mimic a snake of some sort. Its tail ends with a light sea green club in the shape of a snake's head. On it are 8 smooth feathers: seven serve to resemble hair, while the eight covers a light green circle where the eye would go if it were a real snake. Two fang-like horns protrude from the bottom of the club.

The monsters needed to wake up Fleechwurm are reflected in its appearance: its whistling sounds are from Spunge and Reedling, its blue color is from Pummel, and its plates are from Quarrister. Its large tail is from Shellbeat, its feathers are from Furcorn (and Spunge), and, much like a Dandidoo's Dandiflorets, it has feathers growing out of its tail.

The Fleechwurm's song is a combination of 8-bit pixel music and an electric flute. It plays an ascending C minor arpeggio, playing the notes C, E♭, G, and high C. It plays on the 1st and 3rd verses.

The Fleechwurm, like all other Wublins, will produce coins, diamonds, food, and shards, but at no specified rate, although always less than a day.

Multiple Fleechwurms may produce any of these four currencies independently from each other: Coins (

The allotted time to fill a Fleechwurm in order to activate is 5 days. If the inventory is not completed in the time the Fleechwurm resets to an empty statue and all eggs inside are lost.

The Fleechwurms's name is a portmanteau of the word fleech, meaning to coax or induce, usually through flattery, leech, a small, worm-like animal that feeds on the blood of other creatures, and a corruption of the word worm.

To see all possible names for Fleechwurm, see Monster Names.

A sudoku puzzle was posted on Wednesday, July 26th, 2017 about the new Wublin teaser. There erroneously were two different solutions: "Fleechwurm" and "Lleechwurm". It turns out that the Wublin's name was "Fleechwurm". 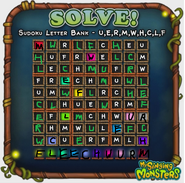 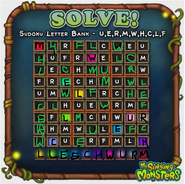