My Singing Monsters Wiki
Register
Don't have an account?
Sign In
Advertisement
in: Articles with missing sections, Articles with incomplete sections, Islands,
and 5 more

This is the main article for Fire Oasis. For the category, see Category:Fire Oasis.

Fire Oasis is a Fire Island in My Singing Monsters.

Fire Oasis is the seventh Island available to the player, and the second Island with the Fire element in breedable form. 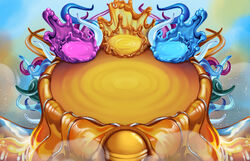 The Monsters of Fire Oasis are of the Fire, Cold, Water, and Air elements. Since Fire Oasis lacks the Earth and Plant elements, no monster with these elements can exist on it. Just as with Fire Haven, there is also a difference with monsters that have the fire element, as they take longer to breed and more difficult to obtain because of their long absence from the monster world.

Although there are currently no Special Occasions in Fire Oasis, the seasonal monster Gobbleygourd is present on the island.

This song is in the key of D# Major with bits of C Minor in some parts of the song. The song plays at 120 beats per minute.

The song starts with Mammott, and Congle playing its first track. The next part is the same as the first, with the addition of Toe Jammer, and Quibble, Pango, Sneyser, and Woolabee playing their first tracks. In the next part, Sneyser, Pango, Toe Jammer, Mammott, and Quibble stop playing, while Woolabee plays its second track, and Whaddle, Phangler, and the Dipsters join in. The next part is a repeat of the second part, with the Toe Jammer and Pango not playing, and the addition of Gobbleygourd. The next part has Mammott and Woolabee stopping their parts, while Tweedle and Glowl start singing, and Congle, Quibble, Pango, and Sneyser play their second tracks. Midway through, Boskus and Maw begin playing. The next part has Congle, Quibble, Sneyser, Glowl, Tweedle, Boskus, and Maw stop playing, while Woolabee and Pango play their third tracks, and Kayna and Wynq begin playing their parts. The song ends with a repeat of Whaddle's part, without Phangler or the Dipsters playing.

Main Article: Castle
To be placed on an island, each monster requires a specific number of beds. For Natural Monsters, this is equal to the number of elements that monster represents. Upgrade the Castle to unlock more beds.