My Singing Monsters Wiki
Register
Don't have an account?
Sign In
Advertisement
in: Islands, Fire Islands, Fire,
and 3 more

This is the main article for Fire Haven. For the category, see Category:Fire Haven.

Fire Haven is a Fire Island in My Singing Monsters.

It's also the first of six islands featuring the fire element (

). It was followed up by the release of Fire Oasis and the four magic islands 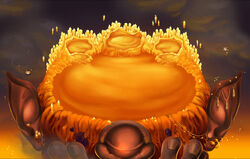 The monsters of Fire Haven are of the Fire, Earth, Plant, and Air elements. Since Fire Haven lacks the Cold and Water elements, no monster with these elements can exist on it. There is also a difference with monsters that have the fire element, as they take longer to breed and more difficult to obtain because of their long term absence from the monster world.

On November 20th, the Fire Monsters living on Fire Haven started celebrating their first ever seasonal occasion, Feast-Ember (the Monster World equivalent of Thanksgiving). With Feast-Ember came fall-themed decorations throughout the island, as well as the introduction of a brand new Seasonal Monster, Gobbleygourd.

The first part of the song is in G minor, then transitions into A# major. The song plays at 140 beats per minute.

Main Article: Castle
To be placed on an island, each monster requires a specific number of beds. For Natural Monsters, this is equal to the number of elements that monster represents. Upgrade the Castle to unlock more beds.