My Singing Monsters Wiki
Register
Don't have an account?
Sign In
Advertisement
in: Ethereal Island, Islands, Ethereal Monsters,
and 7 more

Ethereal Island is an island in My Singing Monsters that is primarily inhabited by all Ethereal Monsters.

Ethereal Island is accessible at level 6 without any purchase in the Apple, Android, and PC versions of the game. It was first released on September 4, 2013.

Ethereal Island does not use Coins (

) for currency. Instead, it uses its own currency called Shards (

This is the only island that allows Ethereal Monsters to breed.

The StarShop was inaccessible on Ethereal Island, but was recently added in Update 3.0.4. 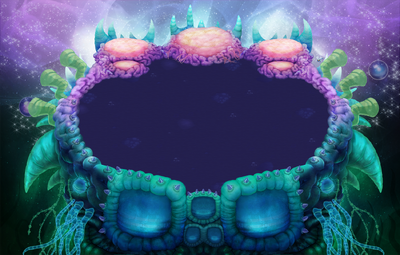 The monsters of Ethereal Island are of the Plasma, Mech, Shadow, Crystal, and Poison elements.

Since Ethereal Island lacks the Natural Elements of Earth, Cold, Water, Plant, and Air as well as the Legendary Element and Seasonal Elements, no monsters with those elements can live on Ethereal Island.

In update 2.1.6, the Dipsters were added to Ethereal Island.

In Ethereal Island, the main difference in breeding mechanics between this island and the Natural Islands is that Ethereal Monsters can now breed with each other, including those with Rare Monster modifiers.

Ethereal Monsters can breed with each other, however, unlike Natural Monsters, breeding using Ethereal Monsters regardless of combination can potentially gain "breeding failures." Thus, for example, Ghazt (Plasma) + Grumpyre (Shadow) will not guarantee a Whisp (Plasma + Shadow) and could still potentially breed either of the two parents.

Originally, all Single-Element Ethereal Monsters could not be bought directly from Ethereal Island; having to be teleported to Ethereal Island in order to "live" on Ethereal Island. However this was changed in the 3.1 update, when they were made available to buy in the market for the price of 1,500 diamonds (

Breeding combinations for all monsters exclusive to Ethereal Island are listed below, provided that the breeding is successful:

The music of Ethereal Island plays at 70 beats per minute (in 4/4), or 210 subdivision beats per minute, in the 6/8 time signature, in mostly B Mixolydian, with parts in E Major.

Shards are a crucial resource, necessary for leveling up Tribal Island and creating Ethereal Diamond Farms.

While the song of the island is crucial, users may also want to use some of these numbers to help with planning which monsters to feed first and make 100% happy first, as well as plan frequency of shard collection. The numbers below are as follows:

For most players aiming for optimal Shard collection, Epic Reebro is currently the best for both holding capacity and generation rate, which is likely to continue for the other Epic Ethereals.

However, the most optimal Shard collection may be attained by using a combination of Rare Wubbox, Epic Reebro, and Dipsters. The main limiting factor is the physical Island space available, as Rare Wubbox's 4x4 size takes up a lot of that space, and it is less efficient for its space than 4 Epic Reebros. However, Epic Reebro takes up 5 Beds, as opposed to Rare Wubbox's 1.